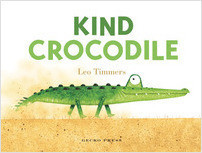 A kind crocodile leaves his pond to see the world, in this fresh and playful new board book from New York Times Illustrated Book Award winning author Leo Timmers.

Animals are in danger—help, kind crocodile! Here comes a terrified mouse, a frightened hog, an antelope. One by one they find shelter on Crocodile’s long back, while his big teeth scare their enemies away. GRRR!

In a fun game of chase, the kind crocodile gives shelter to one animal after another on his long green back, scaring away their pursuers—until the load becomes too heavy and the crocodile doesn’t feel so kind anymore, and turns on his friends. GRRRR!

But not for long: “Just kidding!” says Crocodile.

“Not kind!” say the friends.

This funny board book from Leo Timmers features his trademark detailed illustrations full of expression and a satisfying twist ending—will Crocodile gobble up his friends? Of course not, the kind crocodile is just pretending.

Kind Crocodile is a board book to enjoy again and again, with a lively game of chase and a message about teamwork at its heart. A larger format sturdy board book perfect for reading with toddlers and preschoolers who can join in with the fun repetition.

Leo Timmers was born in Belgium and has a large following as one of Belgium’s pre-eminent picture book artists.

Translated from the Dutch edition by Bill Nagelkerke.

Praise for Leo Timmers
Elephant Island “Yet another triumphant experiment for the award-winning Timmers.” The New York Times

Where Is the Dragon? “A lilting Seussian singsong, with wonderful, surprising rhymes, and little readers and their grown-ups will have a great time combining their voices and giggling through the proceedings.” Kirkus Reviews, starred review

Monkey On the Run “The silly antics of the little monkey provide forward momentum, but the details in each illustration kept calling us back for a more thorough examination.” A New York Times / New York Public Library Best Illustrated Children’s Book 2019

Gus’s Garage “Clearly, one animal’s clutter is another pig’s livelihood in this buoyant, rhyming tale.” The New York Times

Who’s Driving? “Belgian illustrator Leo Timmers creates a delightful play on the fable of “The Tortoise and the Hare”, which sees the hare driving a racing car.” The Telegraph, Book of the Year 2020

“…[T]he humorously expressive illustrations are appealing, as are the prominent appearances of onomatopoeic animal howls incorporated at strategic points throughout. A diverting read on the theme of enough-is-enough.”—Kirkus Reviews

Leo Timmers is one of Belgium's preeminent picture book authors, with a large and loyal following, whose Monkey on the Run was a New York Times / New York Public Library Best Illustrated Picture Book.