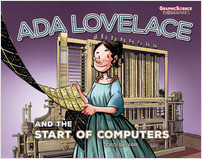 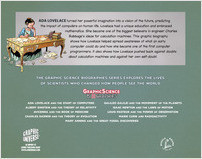 Ada Lovelace and the Start of Computers

From the Series Graphic Science Biographies

Ada Lovelace turned her powerful imagination into a vision of the future, predicting the impact of computers on human life. Lovelace had a unique education and embraced mathematics. She became one of the biggest believers in engineer Charles Babbage’s ideas for calculation machines. This graphic biography shows how Lovelace helped spread awareness of what an early computer could do and how she became one of the first computer programmers. It also shows how Lovelace pushed back against doubts about calculation machines and against her own self-doubt.

“[A] fine introduction to Lovelace and her work. Inspiring and informative.”—Kirkus Reviews

Jordi Bayarri is a freelance comic-book artist based in Valencia, Spain.