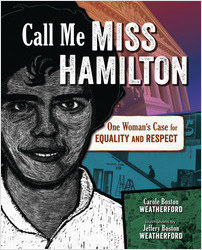 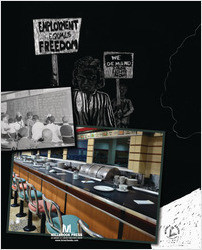 One Woman's Case for Equality and Respect

Discover the true story of the woman Dr. Martin Luther King Jr. nicknamed “Red” because of her fiery spirit!

Mary Hamilton grew up knowing right from wrong. She was proud to be Black, and when the chance came along to join the Civil Rights Movement and become a Freedom Rider, she was eager to fight for what she believed in. Mary was arrested again and again—and she did not back down when faced with insults or disrespect. In an Alabama court, a white prosecutor called her by her first name, but she refused to answer unless he called her “Miss Hamilton.” The judge charged her with contempt of court, but that wasn’t the end of it. Miss Mary Hamilton fought the contempt charge all the way to the Supreme Court.

“Essential reading for teaching children about the importance of demanding equality and respect.”—Kirkus Reviews

“Weatherford introduces young readers to this lesser-known changemaker who challenged the court system for due respect. . . . Lending to this powerful story is mixed-media artwork that blends expressive black-and-white scratchboard illustrations with tinted photos from the time period.”—starred, Booklist

“Hamilton’s inspiring story has not been the focus of any other book, and for that fact alone it is deserving of shelf space. This evocative and informative story of an unsung heroine is recommended for general purchase.”—School Library Journal

Carole Boston Weatherford is the author of numerous award-winning books. Her picture book BOX: Henry Brown Mails Himself to Freedom, illustrated by Michele Wood received a Newbery Honor. Unspeakable: The Tulsa Race Massacre, illustrated by the late Floyd Cooper, was a National Book Award longlist title, won the Coretta Scott King Award for author and illustrator, and received a Caldecott Honor and a Sibert Honor. When she's not traveling or visiting museums, Carole is mining the past for family stories, fading traditions, and forgotten struggles. She lives in North Carolina.

Jeffery Boston Weatherford is an award-winning illustrator, poet, and founder of the global hip hop collective Triiibe Worldwide. Jeffery earned a Master of Fine Arts degree from Howard University where he was a Romare Bearden Scholar. As a teaching artist for the National Book Foundation, he has lectured, performed and conducted workshops in the U.S., Africa, and the Middle East. His illustrated titles include You Can Fly: The Tuskegee Airmen, Africa, A Bat Cave: an Abecedarian Bedtime Chronicle, and Call Me Miss Hamilton. He lives and works in Maryland.

Does Back Matter Matter? A Peek at New Picture Books and their Back Matter

Does back matter . . . matter? If you’re reading our blog, you probably already know that yes, of course it does! Who doesn’t love a good context-exploring author’s note, an events-organizing timeline, or a pronunciation guide that helps make sure you’re not butchering unfamiliar terms?… View →

Launching 2022 into the Stars

By Megan Ciskowski, Associate Publicist The year has started with a smattering of starred titles. Today we share our books that received starred reviews in the first half of 2022! Titles from Lerner Publishing Group Fiction Amazona Grade Level: 9 – 12Age Level: 14 – 18 This singular… View →