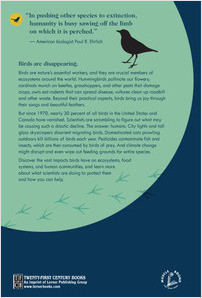 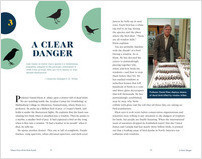 Where Have All the Birds Gone?

Birds are nature’s essential workers, and they are crucial members of ecosystems around the world. Hummingbirds pollinate our flowers; cardinals munch on beetles, grasshoppers, and other pests that damage crops; owls eat rodents that can spread disease; vultures clean up roadkill and other waste. Beyond their practical aspects, birds bring us joy through their songs and beautiful feathers.

But since 1970, nearly 30 percent of all birds in the United States and Canada have vanished. Scientists are scrambling to figure out what may be causing such a drastic decline. The answer: humans. City lights and tall glass skyscrapers disorient migrating birds. Domesticated cats prowling outdoors kill billions of birds each year. Pesticides contaminate fish and insects, which are then consumed by birds of prey. And climate change might disrupt and even wipe out feeding grounds for entire species.

Discover the vast impacts birds have on ecosystems, food systems, and human communities, and learn more about what scientists are doing to protect them.

“Never have my astonishment, wonder, and admiration been so stirred as when I have witnessed these birds drop from their course like meteors from heaven.” —Simon Pokagon, Potawatomi tribal leader

“In pushing other species to extinction, humanity is busy sawing off the limb on which it is perched.” — American biologist Paul R. Ehrlich

“There’s something everyone can do in their lives and in their communities to make it a better place for birds and people.” — Gary Langham, chief scientist, National Audubon Society

“Reading this book should be a must for all. Birds as a part of nature must be preserved, and this book is a very good start for learning about the problems they face.” –Children’s Literature

“Scientist and naturalist Hirsch uses a clear and straightforward style to describe factors leading to the loss of three billion North American birds since 1970 and the meaning of such a catastrophic loss to the environment. . . . [E]asy to read and understand on many levels, including for those beginning to study environmental issues.”—starred, School Library Journal

“Coverage of each topic smoothly incorporates history, science, case studies, and/or work being done to address the problem. . . . It’s impossible to read this and not recognize the seriousness of the problem, but Hirsch also highlights birds’ resilience when given a helping hand.”—starred, Booklist

“This pithy book more than fulfills its promise to introduce readers to the importance of birds, the state of avian research, and how they can contribute to birds’ well-being. . . . Well-informed inspiration.”—starred, Kirkus Reviews

Rebecca E. Hirsch is an award- winning children's author with a PhD in plant biology. Her picture books include Plants Can't Sit Still and Night Creatures: Animals That Swoop, Crawl, and Creep while You Sleep. She lives with her husband and three children in State College, Pennsylvania. You can visit her online at rebeccahirsch.com.

Launching 2022 into the Stars

By Megan Ciskowski, Associate Publicist The year has started with a smattering of starred titles. Today we share our books that received starred reviews in the first half of 2022! Titles from Lerner Publishing Group Fiction Amazona Grade Level: 9 – 12Age Level: 14 – 18 This singular… View →