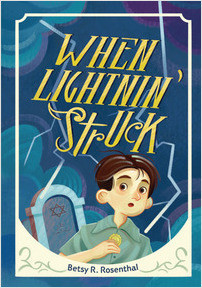 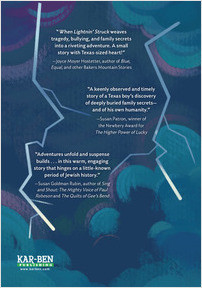 It’s 1928 in Odessa, Texas, and eleven-year-old James is struggling to find his purpose in life and to uncover a family secret. With his father struck dead by lightning and his mother in jail, he is taken in by his grandparents. Treated as a pariah at school, James is taunted as being cursed by his family’s bad luck. But he finds a friend in Paul, a Russian immigrant, who is also treated as an outcast, and together, they battle the school bully. But James’s life is turned upside-down yet again when he uncovers a family secret involving his beloved grandmother. His discovery leads him to find the sense of purpose he’s been seeking.

“Adventures unfold and suspense builds…in this warm, engaging story that hinges on a little-known period of Jewish history.”—Susan Goldman Rubin, author of Sing and Shout: The Mighty Voice of Paul Robeson and The Quilts of Gee’s Bend

“A keenly observed and timely story of a Texas boy’s discovery of deeply buried family secrets—and of his own humanity.”—Susan Patron, winner of the Newbery Award for The Higher Power of Lucky

Before Betsy R. Rosenthal was a writer, she was a civil rights lawyer. She lives with her husband and three children in Pacific Palisades, California. To learn more about Betsy, visit her at www.BetsyRosenthal.com.