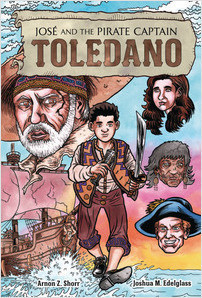 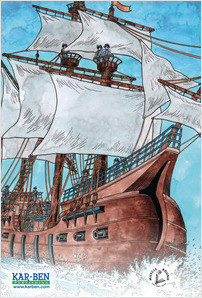 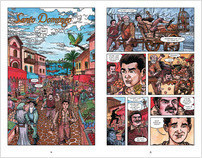 Set in the shadows of the Spanish Inquisition, this is the coming-of-age story of José Alfaro, a young refugee who forms a powerful bond with the mysterious Pirate Captain Toledano. It’s also a dynamic pirate adventure on the high seas, with hand-to-hand combat and ship-to-ship action, and the powerful story of a dark time in history when people took different paths to survive.

José Alfaro is a cocky, rambunctious teen in the 16th-century colony of Santo Domingo, pulling pranks and dodging the authorities. One day, José’s mischief lands him in serious trouble.

Hoping for a fresh start, he stows away on the Laqish, not knowing that it’s a pirate ship. From his hiding place, he watches the pirates divide their loot and plan their attacks on long days at sea. He also takes note of the respect they have for their captain, the intimidating Toledano.

But the captain has a secret—like José, he is a Jew. For him, piracy is not about the gold; it has a different purpose.

Under the tutelage of the ship’s quartermaster, José learns the intricacies of pirate life. But when he can, the captain finds ways to pull José away from the crew, to teach him about his ancestors.

José finds his community. His place. His voice. His purpose.

This is a pirate story, but also a story of survival—a story of a young man’s deep need to know who he is, where he comes from, and where he’s going.

Inspired by the 2017 short film The Pirate Captain, Arnon Shorr and Joshua Edelglass bring an exciting, kid friendly version of this story of Jewish Pirates. José can read and write and is called “an educated freak.” He is a kid trying to figure out where he fits in and becomes even more confused when he finds out from his father that he is Jewish. His father fled Portugal to escape the Inquisition. However, the inquisitor has followed them to Santo Domingo and goes after Jose’s father. In fleeing for his life, José boards the pirate ship the Laqish and discovers that the captain is also Jewish, and he has a vendetta against the inquisitor. Jose stays aboard the Laquish, learning to be a pirate, and helping Captain Toldedano in his quest for revenge. The graphic novel format highlights all the exciting swashbuckling adventures. This title includes a historical note and an author’s note at the end. Readers who liked Jean Laffite: the Pirate who saved America by Susan Goldman Rubin, will also enjoy this title.

“A wonderful adventure that just keeps on giving, this book is a work of art!”―School Library Connection

“José and the Pirate Captain Toledano has everything a middle grade reader could ask for: action, adventure, pirates, challenges to overcome, and a satisfying ending.”―Sydney Taylor Shmooze

Joshua Edelglass’ work has appeared in publications including Tikkun Magazine, and The New Haven Review. His artwork has also appeared in numerous exhibitions, including Pow! Jewish Comics Art and Influence at the Brooklyn Jewish Art Museum. He has watched Star Trek II more times than is probably healthy. For more information about Josh, visit www.MotionPicturesComics.com. He is the Assistant Director of Camp Ramah New England and lives near Boston.

Set in the shadows of the Spanish Inquisition, this is the coming-of-age story of José Alfaro, a young refugee who forms a powerful bond with the mysterious Pirate Captain Toledano. It’s also a dynamic pirate adventure on the high seas, with hand-to-hand combat and ship-to-ship… View available downloads →

We continue our stroll through Lerner Publishing Group’s many imprints with a look at Kar-Ben Publishing, the largest publisher of Jewish children’s books in the world. Read on to learn more about the broad publishing program Kar-Ben enjoys and some of our most familiar and popular books View →