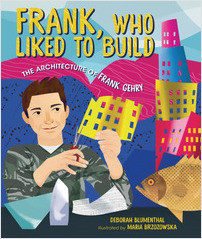 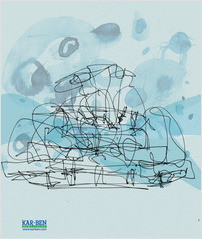 The Architecture of Frank Gehry

One building looks like it’s been wrapped in tinfoil. Another looks like it’s buried under a pile of paint chips. Frank Gehry has been called “the most important architect of our age.” As a child, his parents thought of him as nothing but a dreamer. But Frank kept dreaming and playing, following his passions and becoming an architect who created astounding buildings that to this day attract millions of visitors worldwide.

“Being a Chicagoan, I know Frank Gehry’s work in our beloved Pritzker Pavilion in Millennium Park. Frank, Who Liked to Build gives young readers a fascinating introduction to the creative vision behind one of the greatest architects of our time.” —Sherri Duskey Rinker, author of the Goodnight, Goodnight, Construction Site series

Blumenthal’s message to her juvenile readers: Keep dreaming, playing and following your passions.

This book provides an interesting look at the creative process—the sources of inspiration, the repeated attempts, the doubts, the risk-taking—that could be a springboard for a discussion on this topic for parents, teachers, and librarians.

Recommended for any kid in need of new facts for the dinner table.

This biog­ra­phy of a famous Cana­di­an-Amer­i­can archi­tect is pre­sent­ed through freeform illus­tra­tions that grab your atten­tion the way his build­ings do. Ener­gy jumps off each page, with the book’s com­bi­na­tion of evoca­tive words and emblem­at­ic works.

Author Blu­men­thal ties Frank Gehry’s Jew­ish her­itage to his career and his vision. She does not mince words about the anti­semitism that made him change his name or the dis­ap­proval of his par­ents regard­ing his art career, which they felt would be just a dream. His grand­moth­er is his rock, giv­ing him chal­lah pieces to con­struct the shapes in his head.

Gehry has a per­son­al vision, which he suc­cess­ful­ly forms into dra­mat­ic, use­ful build­ings all over the world; the build­ings are dis­tinc­tive­ly shaped, and they wel­come mil­lions of vis­i­tors. His dar­ing use of form and mate­r­i­al earn him the cov­et­ed Pritzk­er Archi­tec­ture Prize, the equiv­a­lent of the Nobel.

In this pic­ture book, a bold, descrip­tive vocab­u­lary holds its own against the dri­ving, swirling art. Gehry stud­ies, plays, invents, and above all dreams. Then he turns the pos­si­bil­i­ties into real­i­ty by “start­ing with ordi­nary and shap­ing it into extra­or­di­nary one build­ing at a time.”

Deborah Blumenthal is an award-winning journalist and nutritionist, and the author of twenty-three books for adults and children. She has been a regular contributor to The New York Times. Her feature stories have appeared in a wide variety of national newspapers and magazines, including The New York Daily News, The Washington Post, The Los Angeles Times, Harper’s Bazaar, Vogue, Cosmopolitan, Family Circle, and Woman’s Day. Deborah lives in New York City.

Maria Brzozowska was born in Poland and spent most of her childhood growing up in Turkey, where she now lives. She’s a graduate of Leeds Arts University, a visual storyteller who enjoys taking a poetic approach to her art. She uses traditional painting techniques aided by digital methods.

One building looks like it’s been wrapped in tinfoil. Another looks like it’s buried under a pile of paint chips. Frank Gehry has been called “the most important architect of our age.” As a child, his parents thought of him as nothing but a dreamer. But Frank kept View available downloads →