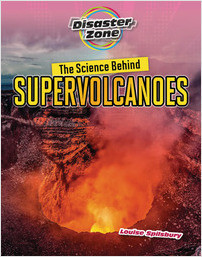 The Science Behind Supervolcanoes

From the Series Disaster Zone

Earth—it’s a disaster zone! For thousands of years, Earth has been exploding with super volcanoes whose magma flows and gas clouds destroy everything in their paths. But what causes these awesome forces of nature and where in the world are they most likely to occur? Discover the science behind super volcanoes, the world’s worst-ever volcano disasters, and the technology that scientists are using to help prevent devastating volcanoes of the future.

Louise Spilsbury is an award-winning author who has written hundreds of wonderful books for children. Her expertly researched and thoroughly engaging text has brought a huge variety of nonfiction topics to life for readers of all ages.

Earth—it’s a disaster zone! For thousands of years, Earth has been ravaged by enormous natural disasters with unthinkable destructive forces. From epic earthquakes and fearsome floods to hurricane horrors, mega tsunamis, raging wildfires, and super volcanoes, our planet and the people… View available downloads →