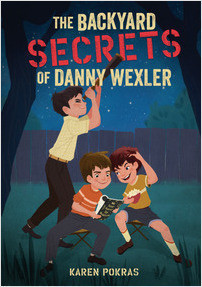 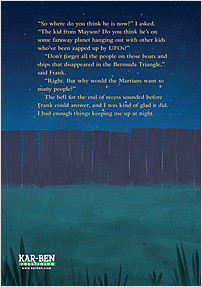 The Backyard Secrets of Danny Wexler

Eleven-year-old Danny Wexler, the only Jewish boy in his blue-collar town during the late 1970s, is obsessed with the Bermuda Triangle. When a local child goes missing, Danny’s convinced it’s connected to an old Bermuda Triangle theory involving UFOs. With his two best friends and their Spacetron telescope, Danny heads to his backyard to investigate. But hunting for extraterrestrials is complicated, and it doesn’t help that his friend Nicholas’s mom doesn’t want her son hanging out with a Jewish boy. Equipped with his super-secret spy notebook, Danny sets out to fight both the aliens and the growing anti-Semitism in the town, in hopes of mending his divided community.

The author skillfully weaves many disparate threads to create a clever and entertaining fabric of community." — Debbie Colodny, AJL Newsletter

“Read­ers will be enter­tained but will also come away with food for thought and mate­r­i­al for seri­ous dis­cus­sion with class­mates, teach­ers, and par­ents as they read about an imag­i­na­tive boy and the world in which he, and all of us, live.” — Michal Hoschander Malen, Jewish Book Council

“She…realistically portrays the microaggressions Danny and his family encounter as a result of anti-semitism as well as the confusion they cause for a young man who is growing up and facing a world that is not always kind to him. Highly recommended.” — Maria J. Sexton, Library Media Specialist, Douglas High School Library, Douglas, Arizona, School Library Connection

Karen Pokras is a writer, daisy lover, and occasional baker. An avid reader, she found her passion for writing later in life and now runs all of her stories past the furry ears of her two feline editorial assistants before anyone else. She lives with her family outside of Philadelphia.