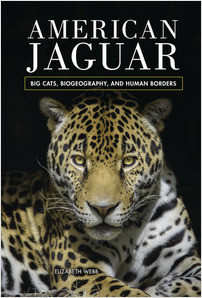 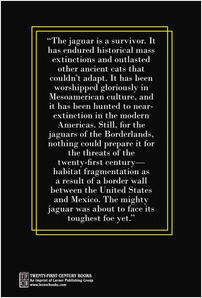 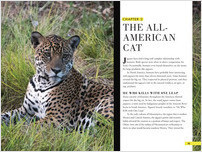 In the borderlands between the United States and Mexico, America’s largest cat—the jaguar—is fighting to regain its kingdom. Added to the endangered species list in 1997, the jaguar has declined in population mainly due to habitat fragmentation created by roads, farms, mines, and most controversially, the border wall. Such human-made barriers prevent free movement of many wild animals for predation and mating, thereby threatening their reproduction, DNA transfer, and overall survival. Author and wildlife biologist Elizabeth Webb examines the jaguar’s predicament and highlights the work of field scientists who are searching for solutions. “Conservation Connection” features throughout the book underscore the importance of protecting this keystone species of the Americas.

“After reading this, the reader will be mesmerized by the plight of animals such as the jaguar, and will surely want to be a part of the solution.” –Children’s Literature

“A powerful call to protect our Earth and its vulnerable creatures.”—starred, Kirkus Reviews

Elizabeth Webb is a writer living in New Mexico, not far from the where the Borderlands jaguars roam. She's spent much of her adult life exploring and photographing the plants and animals of the Desert Southwest. This is her first book for young people.