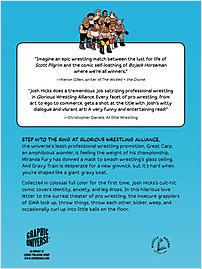 “Josh Hicks has created an epic story that will entertain wrestlers of all ages.” –Children’s Literature