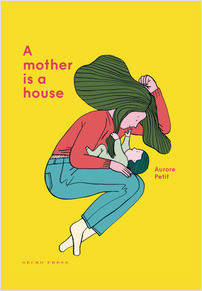 A Mother Is a House

The Times Children’s Book of the Week.

In this eye-catching, neon-bright picture book, a baby sees their mother in every aspect of their day from birth to first steps.

A mother’s a house,
She’s a car in a rush,
She’s a lullaby hush.

As the pages go by, the child grows. The mother becomes a road, a story and a show, the illustrations at times literal, unexpected. On the final page, the child is ready to take their first steps. Because a mother is a home that you carry inside you forever.

Offering a unique baby’s eye view of the first year, A Mother is a House contains all of the funny observations and emotions of a mother and child’s first year together—shown through bright, modern illustrations and special inks.

A chic and stylish gift book for expectant parents, baby showers, new moms, mother’s day, or as a celebratory gift for daughters and grandparents.

Aurore Petit is one of a new young generation of French illustrators to emerge from the influential School of Decorative Arts in Strasbourg. She lives in Paris.

Praise for A Mother is a House:

“Daniel Hahn is a careful, creative translator and his lovely sing-along lines avoid cliché. The tone is never cloying—a feat in a paean to mums for this age group.” —The Times, Children’s Book of the Week

“What’s most striking about the book, though, is its use of intense neon colors both for details and large swaths of the illustrations and for the text itself. The final metaphor says it all: ‘A mother’s a home’.” —Kirkus Reviews

" What’s most striking about the book . . . is its use of intense neon colors both for details and large swaths of the illustrations and for the text itself."—Kirkus Reviews

Aurore Petit graduated from the School of Decorative Arts in Strasbourg and now lives in Paris. She publishes children's books, illustrates for magazines, and designs for the stage.