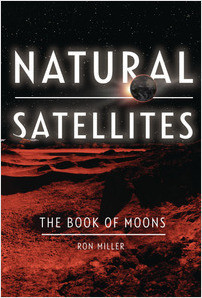 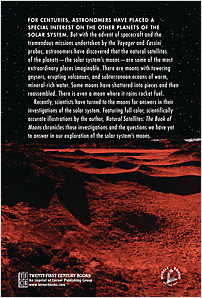 The Book of Moons

For centuries, astronomers have placed a special interest on the other planets of the solar system. But with the advent of spacecraft and the tremendous missions undertaken by the Voyager and Cassini probes, astronomers have discovered that the natural satellites of the planets—the solar system’s moons—are some of the most extraordinary places imaginable. There are moons with towering geysers, erupting volcanoes, and subterranean oceans of warm, mineral-rich water. Some of the highest mountains and deepest canyons can be found on the moons. There are moons that have shattered into pieces and then reassembled. There is even a moon where it rains rocket fuel.

Recently, scientists have turned to the moons for answers in their investigations of the origins of the solar system and the evolution of life on our own planet. Featuring full-color, scientifically accurate illustrations by NASA artist Ron Miller, Natural Satellites: The Book of Moons chronicles these investigations and the questions we have yet to answer in our exploration of the solar system’s moons.

“The concise, crystal clear writing is supplemented by photography, photorealistic illustrations, and diagrams . . . an excellent resource for teen selenophiles.”—Booklist

“An illuminating journey through the moons of our solar system, presenting goals for future space exploration.”—Kirkus Reviews