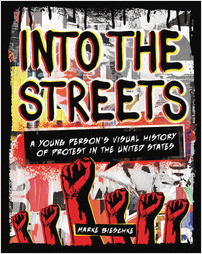 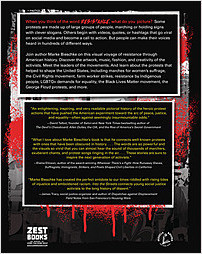 A Young Person's Visual History of Protest in the United States

What does it mean to resist?

Throughout our nation’s history, discrimination and unjust treatment of all kinds have prompted people to make their objections and outrage known. Some protests involve large groups of people, marching or holding signs with powerful slogans. Others start with quotes or hashtags on social media that go viral and spur changes in behavior. People can make their voices heard in hundreds of different ways.

Join author Marke Bieschke on this visual voyage of resistance through American history. Discover the artwork, music, fashion, and creativity of the activists. Meet the leaders of the movements, and learn about the protests that helped to shape the United States from all sides of the political spectrum. Examples include key events from women’s suffrage, the civil rights movement, occupations by Indigenous people, LGBTQ demands for equality, Tea Party protests, Black Lives Matter protests, and more, including the George Floyd protests in the summer of 2020.

Into the Streets introduces the personalities and issues that drove these protests, as well as their varied aims and accomplishments, from spontaneous hashtag uprisings to highly planned strategies of civil disobedience. Perfect for young adult audiences, this book highlights how teens are frequently the ones protesting and creating the art of the resistance.

“[A] how-to guide for young dissidents.”—Booklist

“[E]xpansive and inclusive . . . This roundup of rallies, parades, sit-ins, walkouts, boycotts, and more shows there are as many protest methods as there are reasons to protest.” —Publisher’s Weekly

“Into the Streets connects young social justice activists to the long history of dissent.”—James Tracy, author of Dispatches Against Displacement and co-author of Hillbilly Nationalists, Urban Race Rebels, and Black Power

“An eye-opening, time-machine trip through the epic drama of American direct democracy.”—David Talbot, New York Times-bestselling author of The Devil’s Chessboard: Allen Dulles, the CIA and the Rise of America’s Secret Government and Brothers: The Hidden History of the Kennedy Years

“Sure to inspire the next generation of activists.”—Elaine Elinson is the author of the award-winning Wherever There’s a Fight: How Runaway Slaves, Suffragists, Immigrants, Strikers and Poets Shaped Civil Liberties in California

Marke Bieschke has worked as an editor at Gay.com, PlanetOut.com, and the San Francisco Bay Guardian.