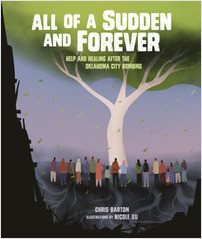 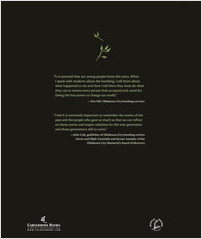 All of a Sudden and Forever

Help and Healing after the Oklahoma City Bombing

Those who survived—and those who were forever changed—shared their stories and began to heal. Near the site of the bomb blast, an American elm tree began to heal as well. People took care of the tree just as they took care of each other. The tree and its seedlings now offer solace to people around the world grappling with tragedy and loss.

Released to coincide with the 25th anniversary of the Oklahoma City bombing, this book commemorates what was lost and offers hope for the future.

“[A] sensitive and sober examination of the Oklahoma City bombing.”—The Horn Book Magazine

“This ultimately triumphant work of nonfiction reverently pays tribute to the memory of those whose lives were forever changed by this tragedy.”—Booklist

Nicole Xu is an illustrator who was born in Shanghai, China, and grew up in Vancouver, Canada. She attended Rhode Island School of Design and has worked with numerous newspaper and magazine clients. Her work often explores themes of loss, healing, and empathy. Her debut picture book All of a Sudden and Forever is an Orbis Pictus Recommended Book. She lives in Brooklyn, New York, with her dog. See more of her art at www.nicole-xu.com.