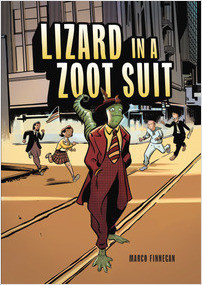 Lizard in a Zoot Suit

Los Angeles, 1943. It’s the era of the Zoot Suit Riots, and Flaca and Cuata have a problem.

It’s bigger than being grounded by their strict mother. It’s bigger than tensions with the soldiers stationed nearby. And it’s shaped like a five-foot-tall lizard. When a lost member of an unknown underground species needs help, the sisters must scramble to keep their new friend away from a corrupt military scientist—but they’ll do it in style. Cartoonist Marco Finnegan presents Lizard in a Zoot Suit, an outrageous, historical, sci-fi graphic novel.

“[Lizard in a Zoot Suit] is both a politically charged drama and a pulpy sci-fi story all in one, and an ideal graphic novel for Young Adults.”—Comicon.com

“A new YA graphic novel [that] takes a moment in real world history and turns it into the basis for a thrilling adventure that is never anything less than stylish.”—The Hollywood Reporter

“Marco Finnegan provides smart commentary on racism, gender roles and the counterculture of the period. Teens will enjoy this sci-fi take on a moment in U.S. history that isn’t discussed enough.”-Mom Read It

“A new YA graphic novel [that] takes a moment in real world history and turns it into the basis for a thrilling adventure that is never anything less than stylish.”–The Hollywood Reporter

“A unique and effective lens through which fans of historical fiction can view the treatment of the ‘other’ and race issues of the 1940s.”—School Library Journal

“This fun, character-driven, all-ages historical sci-fi romp is wacky, out-of-this-world and pure enjoyment. Finnegan pulls out all the stops and crafts a unique adventure that feels fresh and vibrant.” —Alex Segura, acclaimed comic book writer of THE BLACK GHOST, THE ARCHIES and more

“Though the adventure is fast-paced and fun, themes of racism, colonialism, counterculture, and family are all explored. . . . Period pop horror that will lure readers in for important history lessons.”—Kirkus Reviews

“An entertaining and meaningful story. The bicultural characters and diverse Mexican American setting are a fun entry point into some serious Chicano history, the era of the 1940s Zoot Suit Riots. Put on your tacuche and your tando, and get ready for Lizard in a Zoot Suit!”—Lalo Alcaraz, illustrator of Latino USA: A Cartoon History

“Lizard in a Zoot Suit is a beautifully rendered, heartbreaking, and insightful graphic adventure.”—John Jennings, illustrator of Kindred: A Graphic Novel Adaptation

Marco Finnegan is an educator by day and writes and draws comics by night. He lives in Temecula, California.