From the Series Death Uncovered

Imagine stepping into an old farmhouse. You hear noises—banging and knocking sounds, chains being dragged across the floor—but nothing is there. You hear an old woman’s voice . . . but you are alone. You have just discovered the house haunted by the Bell Witch. In Death Uncovered: Haunts and Horrors, readers will learn about the Bell Witch and five other chilling hauntings, including a ghost who walks the halls of the White House and a headless woman who stalks the Tower of London. Featuring an engaging narrative style, location map, and fun paranormal facts, each story will allow readers to explore haunted houses, famous ghost stories, and things that go bump in the night.

“An unintimidating and engaging series for reluctant readers and fans of all things spooky.”—School Library Journal, Series Made Simple

Meghan Gottschall grew up in Walla Walla, Washington. She holds a BA and MA in French Literature and taught college French for 12 years. She lives in the Midwest with her husband and two sons. 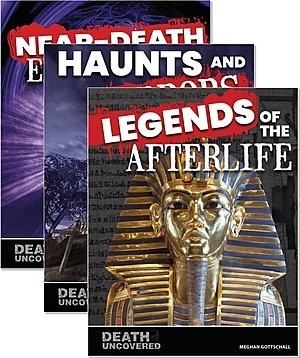