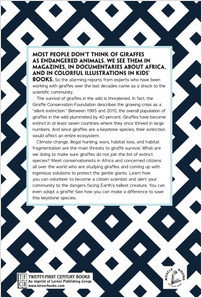 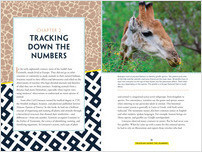 Using Science and Technology to Save the Gentle Giants

Quietly, without most people noticing, the population of giraffes in the wild has decreased by nearly 40 percent since 1985. Giraffes have disappeared entirely from seven countries where they used to live. Researchers believe fewer than 98,000 exist in the wild—fewer even than endangered African elephants. In 2016, the International Union for the Conservation of Nature added giraffes to the organization’s Red List of Threatened Species. What is causing their disappearance? Overpopulation of humans in giraffe habitats and illegal poaching. Learn about giraffes’ physical characteristics, habitats, and life cycles; examine the dangers they face from humans and climate change; and meet the scientists working to save these gentle giants using technology and conservation efforts.

“Purchase for school and public libraries where endangered species are a hot research topic.”—School Library Journal

“[W]ell researched and will prove a useful resource to students researching wildlife conservation.”—Booklist

“A fascinating and comprehensive analysis of the tragic decline of giraffes and the heroic efforts to reverse this trend.”—Kirkus Reviews

Tanya Anderson is an award-winning editor of books for young readers. Her particular passion is to create engaging nonfiction books for reluctant readers, those who are capable readers but who have become uninterested in reading. Anderson discovered this need when she taught high school history and English. She continues in her role as a teacher and guide through the books she edits and writes.Anderson graduated from Wittenberg University in Springfield, Ohio, after a dozen years in the education field, she followed her dream of joining the children's book publishing world. She has worked for more than twenty years in various editorial functions for Pages Publishing Group/Willowisp Press, Guideposts for Teens, SRA/McGraw-Hill, Darby Creek Publishing, and now has her own book packaging company, School Street Media. Besides working with some of the most wonderful authors and illustrators in the business, Anderson has also had more than thirty books published in the children's and educational book markets.