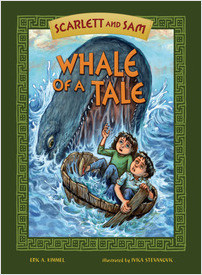 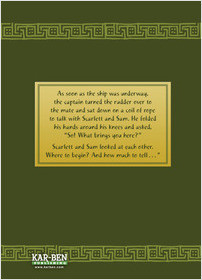 Whale of a Tale

From the Series Scarlett and Sam

Scarlett and Sam are back again in a twist on the biblical adventure tale of Jonah and the whale. When the twins take Grandma Mina’s special carpet to be cleaned and repaired, they encounter a strange person who steps on the rug and disappears! Scarlett and Sam follow him back through time to ancient Israel, where they find themselves on a ship. Why have they been sent back in time to this ship on a stormy sea? Soon the answer comes. The man is Jonah and they’re in the story of Jonah and the whale! Sam and Scarlett know that they must do what the ship’s captain cannot—get Jonah overboard—even if that means that they must go overboard, too!

Scarlett and Sam, the time-travelling twins from Escape from Egypt (Kar-Ben, 2015) and Search for the Shamir (Kar-Ben, 2018) have returned to experience first-hand the story of Jonah. When they offer to take their Iranian grandmother’s priceless antique carpet to the carpet cleaner, they hire a “Loft” driver to get them there and back. During the ride, they learn that their driver, Jon (aka Jonah), is running away from his boss. Upon arriving at the carpet cleaner’s store, they realize they have forgotten the carpet in the Loft’s trunk. As they run after the car, screaming for the driver to stop, they jump into traffic and come perilously close to being run over by an oncoming…ox cart! Thus begins their adventure in the ancient Middle East, which takes them from a carpet seller’s stall in the Jaffa shuk to a ship headed across the Mediterranean where they re-meet Jon(ah), to a rather disgusting ride inside a very large fish to Nineveh. Upon their arrival in Nineveh, they must use every trick in the book to convince the people holding them to take them to the king. Thankfully, a large earthquake provides the impetus for the king’s counselor to quickly get them an audience. During the ensuing audience, the king tries to manifest his power but cannot overcome an aftershock that destroys his throne room and their god’s temple. Begging for mercy, the Assyrian king, who it turns out is a young boy, agrees to do whatever Israel’s God asks of him. Of course, Jonah is less than happy about this turn of events, as he felt God should severely punish the Assyrians. After storming off, the twins find him on a mountaintop, dying of thirst and mourning the loss of his gourd vine. After the twins point out the silliness of mourning over a gourd while wanting innocent people to be slaughtered, they find themselves mysteriously returned to the carpet cleaner’s shop, carpet in hand. The story accurately follows the Jonah tale, while including the twins in the decision making over such events as to how they are going to get out of the belly of the fish or how to convince the Assyrians that God means business. Their resourcefulness, despite their surprising circumstances, is remarkable, always demonstrating that a positive attitude can overcome even the most dire situation. The title is a good addition to the series and provides a supplemental High Holiday story that will be very appealing to younger readers.

“Kimmel employs modern syntax and references, matching the breakneck pace of the action. Sam and Scarlett are resourceful and wise beyond their years as they deal with an exasperating and stubborn Jonah. Stevanovic’s manga-inflected, grayscale illustrations feel both ancient and modern. A lively, magical tale of ancient times with a modern ethos.”―Kirkus Reviews

Eric A. Kimmel has been writing for children for more than 40 years. His 100-plus titles include such classics as Anansi and the Moss-Covered Rock and The Chanukkah Guest. He lives in Portland, Oregon.

Ivica Stevanovic has illustrated numerous picture books, as well as book covers and graphic novels. He lives in Veternik, Serbia, with his wife, who is also a children's illustrator, and their daughter.