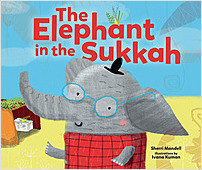 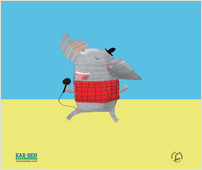 The Elephant in the Sukkah

Henry, once a happy circus elephant, feels lonely and sad at the farm for old elephants, where nobody wants to hear him sing. One evening, he follows the sound of music and singing to the Brenner family’s sukkah. At last, a place where he might sing. But Henry cannot fit inside the sukkah! Ori knows it’s a mitzvah to invite guests, and he gets a big idea about how to include Henry in the Sukkot fun.

What’s a per­form­ing ele­phant to do when his celebri­ty begins to wane and he is no longer sought after by his ador­ing audi­ences? Poor Hen­ry the ele­phant is accus­tomed to acclaim and applause, and a qui­et life holds no attrac­tion for him. Retire­ment does not suit him one bit. He still loves to sing but no one wants to lis­ten and Hen­ry con­tin­ues to crave an audi­ence. One day, he fol­lows some musi­cal strains in the air which lead to him to a sukkah in which a fam­i­ly is sit­ting and enjoy­ing the hol­i­day, singing song after song. Hen­ry is elat­ed. The first time he lis­tens qui­et­ly but, when he returns a sec­ond time, he joins in. Young Ori hears him singing and invites him inside to share the hol­i­day with the fam­i­ly but, alas, Hen­ry is sim­ply too big to fit inside the small sukkah. Ori has a clever idea. He sug­gests that Hen­ry use his enor­mous body as one wall of the sukkah itself, enabling him to join in the laugh­ter and song. Hen­ry is grat­i­fied to have such an impor­tant job and sings joy­ous­ly along with the fam­i­ly at the hol­i­day meal. As the sto­ry clos­es, Hen­ry is already plan­ning his own sukkah for the next year and invites Ori and his fam­i­ly to be his guests.

The sto­ry is based on an actu­al Tal­mu­dic dis­cus­sion, although this is not indi­cat­ed in the book. The sages actu­al­ly debat­ed whether using a liv­ing being, such as an ele­phant, would be accept­able for use as a sukkah wall. If this fas­ci­nat­ing his­tor­i­cal fact is not­ed, it will sure­ly tick­le the fan­cy of adult and child alike.

This whim­si­cal tale con­tains a trea­sure-trove of sub­stance between its decep­tive­ly sim­ple lines. The abil­i­ty to rise above dis­ap­point­ment, the time-hon­ored mitz­vah of wel­com­ing guests, the glo­ry of com­mu­nal singing and fam­i­ly cel­e­bra­tion, a cre­ative approach to prob­lem-solv­ing, and the hol­i­day of Sukkot itself, each play a role in the joy­ous tale. An expla­na­tion of the hol­i­day is append­ed for par­ents and chil­dren who may not be famil­iar with its details. The mut­ed but appeal­ing col­or illus­tra­tions per­fect­ly con­vey the humor and warmth in the sto­ry. Hen­ry the ele­phant will live on in the imag­i­na­tions of young read­ers and listeners.

Sherri Mandell is the author of several books including the National Jewish Book Award winner The Blessing of a Broken Heart. She is also the author of Writers of the Holocaust (Facts on File) and has been a contributor to USA Today, The Times of Israel, Hadassah Magazine, and the Jerusalem Post. She lives in Israel.

Award-winning illustrator Ivana Kuman is a graduate of the Arts Academy in Zagreb. She has written and illustrated many picture books for children and is the author of 35 short animated films for children, and one for young adults. She lives in Zagreb with her husband, two daughters and a cat.