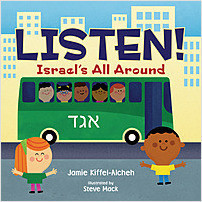 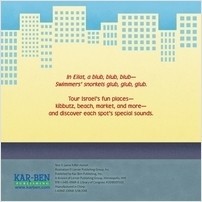 Tour Israel’s most fun places—kibbutz, beach, market, and more—and discover each spot’s special sound in this rhyming tribute to the sounds of Israel.

“Some people believe that the sound effects are the best part of a comic book. This story is for them. If someone removed all the words from a graphic novel except for the sound effects, it would sound a lot like this board book. Sample text: ‘Rumble, bumble, zoom, zoom, zoom. / Kibbutz tractors vroom, vroom, vroom.’ The book is a sort of Gerald McBoing-Boing guide to Israel, highlighting a different cultural activity on every page. Key words appear in brightly colored letters: In addition to kibbutz, for instance, there are ‘palm trees,’ ‘falafel,’ ‘pita,’ ‘windmill,’ and ‘matkot’ (an Israeli game that’s similar to beach tennis but without a net). Mack’s digital illustrations are so stylized that, charmingly, the children in the pictures are shaped just like their matkot paddles. The pictures feature every shade of skin tone, which will make Israel even more appealing to many readers. The constant sound effects don’t leave much room for an in-depth look at Israeli culture, but the variety of activities covered in a 12-page book is impressive, and ‘pock, pock, pock!’ is a surprisingly effective summary of matkot. The book is a terrific, if slight, way to introduce toddlers to Israel. The only danger is that they’ll spend the rest of the day saying ‘glub, glub, glub’ and ‘pock, pock, pock!’—Kirkus

Jamie Kiffel-Alcheh regularly writes for National Geographic KIDS. Her many books include Hard Hat Cat, Kol Hakavod: Way to Go!, A Hoopoe says Oop!, Rah! Rah! Mujadara, Can You Hear a Coo, Coo? and Listen! Israel's All Around. She is also a lyricist for pop songs, advertisements and motion pictures. She lives in Burbank, California.

Steve Mack is a children's book and greeting card illustrator. He lives in Lumsden, Saskatchewan, Canada, with his wife and two children.