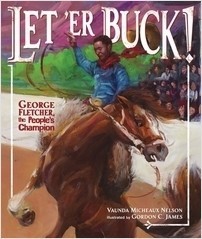 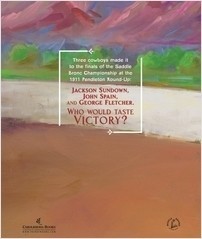 “Nelson plaits her narrative with Western lingo and homespun similes. . . . James’ painterly oils swirl with energy, visible daubs creating the dusty, monumental landscape and equally monumental horses and humans. . . . A champion indeed.” —Kirkus Reviews (starred review)
The true tale of a cowboy’s epic rodeo ride from acclaimed author Vaunda Micheaux Nelson and Caldecott Honoree Gordon C. James.
In 1911, three men were in the final round of the famed Pendleton Round-Up. One was white, one was Indian, and one was black. When the judges declared the white man the winner, the audience was outraged. They named black cowboy George Fletcher the “people’s champion” and took up a collection, ultimately giving Fletcher far more than the value of the prize that went to the official winner. Award-winning author Vaunda Micheaux Nelson tells the story of Fletcher’s unlikely triumph with a western flair that will delight kids—and adults—who love true stories, unlikely heroes, and cowboy tales.

“An excellent choice for most biography collections. The rollicking language and gorgeous art make this a terrific read-aloud and conversation starter for older elementary students.”—starred, School Library Journal

“[E]nthralling. . . . A distinguished depiction of men and horses, and an under-told piece of history from the Old West.”—starred, Booklist

“[A] triumphant tale of fairness trumping prejudice for a wrangler extraordinaire.”—starred, Publishers Weekly

As a fine artist, Gordon C. James works to achieve the highest level of beauty. His work has been in International Artist Magazine, and is part of the Paul R. Jones Collection. Gordon's illustrations, are soulful, and technically sound. He has won Caldecott and Coretta Scott King Honors, a Society of Illustrators Gold Medal, a Charlotte Huck Award, and the Kirkus Prize for his work. Gordon lives in Charlotte, NC with his wife Ingrid and their children Astrid and Gabriel and their dog Rascal.