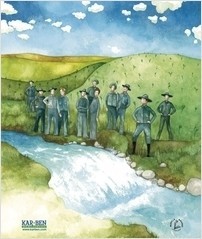 Pavel and the Tree Army

Pavel is a new American, excited about his new country. When his rabbi tells him that the Civilian Conservation Corps is hiring young people, Pavel is thrilled. As a member of the Corps, he learns to plant trees, build dams, and take care of the land. But not everyone in the Corps thinks Pavel belongs in America. It’s not until he and his immigrant friends learn to sing the country’s new national anthem, “The Star-Spangled Banner” in time for Independence Day celebrations, that they’re welcomed as true Americans.

“In a setting featuring the Civilian Conservation Corps, Hyde (Shanghai Sukkah) tells a foundational American story of a struggling immigrant who encounters prejudice but finds his way. Pavel is beset with worry after leaving the bread lines of Depression-era New York City to plant trees and build dams in Idaho as part of the CCC. Everything is unfamiliar, but his friend Anatoly, also a Russian immigrant, offers comfort: ‘Don’t worry, Pavel. We will learn.’ When another corps member insists that ‘real Americans’ know the new national anthem, that can-do mantra stands Pavel and Anatoly in good stead. The two, and the tree army’s other new immigrants, learn the lyrics just in time to sing along at the Fourth of July picnic, where Pavel’s thoughtful sergeant counters bias with kindly wisdom: ‘It will take time for the saplings you planted to take root, but they are now part of this land. And so are you.’ Vavouri (A Hanukkah with Mazel) uses a whimsical, folkloric style that conveys Pavel’s warm, wide-eyed worldview in richly toned illustrations. An author’s note offers extra context, amplifying the book’s celebration of the essential ways in which immigrants have contributed to the U.S. Ages 5–9.” —Publishers Weekly

“In Depression-era America, Pavel, a Russian-Jewish immigrant, joins the Civilian Conservation Corps and learns to blend his new American identity with his Jewish one. On the advice of his rabbi, Pavel decides to take a job planting trees all over the country as part of the new program established by President Franklin D. Roosevelt. Arriving in Idaho, Pavel’s first impression is that this empty landscape seems quite foreign compared to a bustling, busy New York City, but Pavel is encouraged by the prospect of three meals a day and hard-earned money to help support his family. However, some of the men he meets on his team scrutinize Pavel’s accent and claim he cannot be a real American. Pavel wonders how he can prove that he is just as American as his co-workers. As the Fourth of July approaches, Pavel and his fellow immigrant workers learn the words to the newly declared national anthem, ‘The Star-Spangled Banner,’ and sing it at the fireworks display, proudly declaring their new American status. Demonstrative, stylized paintings feature an assortment of sturdy, earnest young men (all pale-skinned) dressed in blue/green uniforms planting a plethora of tree saplings. The author’s not-so-subtle metaphor illustrates how Pavel’s work allows him to feel rooted in his new country just as his plantings grow and thrive in today’s national parks and forests. A timely theme to emphasize America’s promise for each generation of newcomers.”—Kirkus Reviews

Heidi Smith Hyde is the director of education of Temple Sinai in Brookline, Massachusetts. Her books include Feivel's Flying Horses, a National Jewish Book Award Finalist, and Mendel's Accordion, winner of the Sugarman Award.

Elisa Vavouri was born in Athens, Greece. She studied art, graphic design, and painting at the Vakalo Art and Design College in Athens. She has illustrated more than 70 books. She lives in Germany.