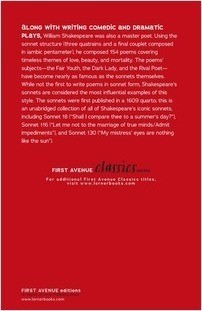 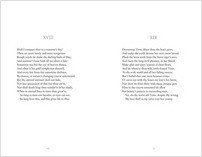 Along with writing comedic and dramatic plays, William Shakespeare was also a master poet. Using the sonnet structure (three quatrains and a final couplet composed in iambic pentameter), he composed 154 poems covering timeless themes of love, beauty, and mortality. The poems’ subjects—the Fair Youth, the Dark Lady, and the Rival Poet—have become nearly as famous as the sonnets themselves. While not the first to write poems in sonnet form, Shakespeare’s sonnets are considered the most influential examples of this style. The sonnets were first published in a 1609 quarto; this is an unabridged collection of all of Shakespeare’s iconic sonnets, including Sonnet 18 (“Shall I compare thee to a summer’s day?”), Sonnet 116 (“Let me not to the marriage of true minds/ Admit impediments”), and Sonnet 130 (“My mistress’ eyes are nothing like the sun”).