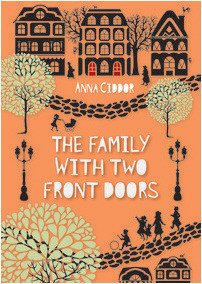 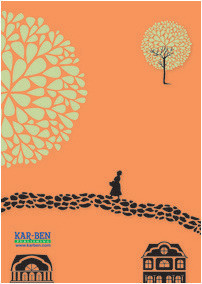 The Family with Two Front Doors

Meet the Rabinovitches: mischievous Yakov, bubbly Nomi, rebellious Miriam, solemn Shlomo, and seven more! Papa is a rabbi and their days are full of intriguing Jewish rituals and lots of adventures in 1920s Poland. But the biggest adventure of all is when big sister Adina is told she is to be married at the age of fifteen—to someone she has never met. Originally published in Australia.

“How can a family have two front doors? Easy – if they live in 1920s Lublin, Poland, have nine children, and need two apartments – one to live in, the other in which the rabbi/father studies and conducts business. Based on Ciddor’s grandmother Nomi’s reminiscences, this historical fiction hearkens back to a more innocent time. Nothing is mentioned about the aftermath of World War I. Except for two instances of anti-Semitism, we have little foreshadowing of the Holocaust. The main event that occurs in this prosperous Orthodox Jewish family’s life is the betrothal and marriage of the eldest daughter, Adina, to a man she’s never met. No less important than the impending marriage are the preparations, rituals, and joys of Shabbos. The novel abounds with small problems: Will ten-year-old Nomi be able to make the gefilte fish all by herself? Can Yakov carry home a heavy carp without help? Will everyone board the train on time for a picnic in the country? Not to worry. Every problem is resolved neatly. At first, it might be difficult for the reader to differentiate between the many characters, but Ciddor skillfully emphasizes one trait for each person. For example, Yacov is mischievous, Nomi is curious, and Shlomo is studious (to a fault). To help the reader, Ciddor has illustrated a lively ‘family portrait’ at the front of the book, where each person’s name and age are given. A third-person narrator tells the story, but we see the events mainly through the perspective of Nomi and Yakov. Ciddor is knowledgeable about Orthodox Jewish rituals and customs, adding authenticity to the telling. The sensory details such as ‘The air smelled of warm hay and ripe plums’ add to the enjoyment of this story. The back matter includes a useful glossary. The novel is sure to please the Orthodox Jewish reader, or anyone who likes a wholesome story about a loving family.” – Association of Jewish Libraries

“The nine children in The Family With Two Front Doors by Anna Ciddor (KarBen, £6.99), live with their mother and rabbi father in 1920s Lublin. They have two doors because they need two apartments to accommodate them all. Ciddor bases the story on the childhood of her Nana Nomi, whose initiation into making gefilte fish is memorable. Readers age seven up would be charmed by the cholent-making, challah-baking and 15-year-old Adina’s arranged marriage, but some darker moments are more suited to over-10s.” – The Jewish Chronicle

“Based on the childhood of the author’s grandmother, this story follows an Orthodox Jewish family in Lublin, Poland in the 1920s. The family, which includes nine children, is so large that they need two houses joined together—thus the title.
The book presents customs that will be new to readers, like Beggars’ Day, when the family opens their door to hungry townspeople. Other Jewish practices will be familiar: traditional matchmaking for the oldest daughter, baking challah, and more.
This is a charming tale, similar in style to the ‘All-of-a-Kind Family’ and ‘Little House’ series in its gentleness, family-centeredness, and air of kindness. No hints of what is to come in Europe in the following decades deflate this light soufflé of a book.
Recommended for ages 8 to 12.” – Jewish Book Council

“Ciddor’s lively novel transports readers to the Jewish quarter of the town of 1920s Lublin, Poland, where the Rabinovitch family of 11 (including a rabbi father, a mother, and their nine children) carries out its Orthodox traditions in both rambunctious and respectful style. Reverence and love for the religious and cultural rituals are seen through the eyes of two of the younger children: enthusiastic 10-year-old Nomi (named for the author’s grandmother, whose memories were the basis for the book) and mischievous eight-year-old Yakov. The story is rich in sensory details—food is always being bought, prepared, eagerly anticipated, and savored—and flows with energetic family dynamics and warmth, though it’s somewhat light on plot. The narrative centers on the betrothal of 15-year-old Adina, the family’s eldest girl, and on preparations for her arranged marriage; the major element of suspense is whether she will have to leave Lublin for faraway Warsaw after the wedding. Apart from one scene in which the children are harassed for being Jews, the story maintains a positive tone, offering a sympathetic look at traditional Jewish life in an earlier era. A glossary of Jewish and Yiddish words and an author’s note are included. Ages 8–12” – Publisher’s weekly

Anna Ciddor has made her name as a versatile writer and illustrator of fiction, travel, and historical books for children. She lives in Australia.