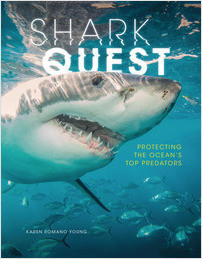 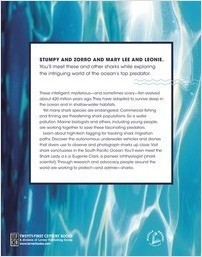 Sharks are in trouble.

Fifty shark species are at high risk of extinction, and another sixty-three are threatened. These intelligent, mysterious—and sometimes scary—fish evolved about 420 million years ago. They have adapted to survive deep in the ocean and in shallow-water habitats. Commercial fishing and finning are threatening shark populations. So is water pollution. Marine biologists and others, including young people, are working together to save these fascinating predators.

Discover the work of scientists and conservationists as they study shark biology and morphology; research migration, feeding, and mating patterns; delve into human, climate, and other threats to shark habitat; and develop sophisticated technologies to aid sharks and shark research. See how scientists also educate the public about real and imagined fear of sharks and encourage citizen participation in shark conservation efforts. Learn about high-tech tagging for tracking shark migration paths. Discover the autonomous underwater vehicles and drones that divers use to observe and photograph sharks up close. Visit shark sanctuaries in the South Pacific Ocean. You’ll even meet the Shark Lady, a.k.a. Eugenie Clark, a pioneer ichthyologist (shark scientist). Through research and advocacy, people around the world are working to protect—and admire—sharks.

“[A]n engaging, well-researched book about a much maligned species of fish that deserves our protection.”—Booklist

“A remarkably thorough tour of the world of sharks and marine scientists’ efforts to educate the public about our ocean’s apex predators.”—Kirkus Reviews

“A must-purchase for libraries with fans of Shark Week.”—School Library Journal

“[A]n engaging, well-researched book about a much maligned species of fish that deserves our protection.”—Booklist

“A remarkably thorough tour of the world of sharks and marine scientists’ efforts to educate the public about our ocean’s apex predators.”—Kirkus Reviews

Karen Romano Young has dived to the bottom of the Pacific Ocean in a tiny submarine, crunched through Arctic ice in an icebreaker, and visited labs, museum workshops, and research institutions across the U.S. to write and draw about science. She was a lead science communications fellow aboard Dr. Robert Ballard's research ship E/V Nautilus. Karen has written and/or illustrated more than 30 books for children and is the creator of Humanimal Doodles, a science comic. Her nonfiction books include Try This! and Try This Extreme! (National Geographic). Her fiction work includes The Beetle and Me: A Love Story; the graphic novel Doodlebug: a Novel in Doodles; and Hundred Percent. Her next book for Twenty-First Century Books is Whale Quest. Karen lives with her family in the woods of Bethel, Connecticut. Her next adventure is a stint at Palmer Station, Antarctica, as the recipient of the National Science Foundation's Antarctic Artists and Writers Grant. She has not yet traveled to space.