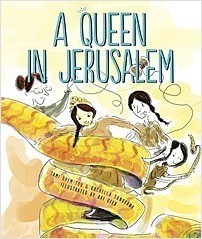 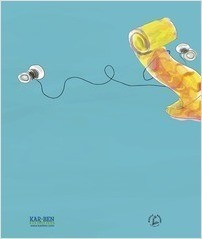 A Queen in Jerusalem

In Jerusalem, in the early 20th century, a little girl named Malka—"queen" in Hebrew—dreams of dressing up as Queen Esther. It is the festival of Purim, and all the kids are looking forward to celebrating in their costumes. But Malka’s mother doesn’t have time to prepare a Purim costume for her. Where can Malka get a costume in time for the holiday?

“Malka is disappointed that her mother doesn’t have time to make her a Purim costume, but her mother thinks she’s now old enough to make her own. Malka sadly walks through the streets of Jerusalem. She can sense the city’s excitement for the holiday, but struggles to feel excited herself. How can she represent beautiful Queen Esther on Purim without her mother’s expert help?
As Malka wanders through the city, she discovers the magic of Jerusalem. She meets a man named Boris who introduces her to a group of weavers who fashion her a spectacular robe with golden threads. He then finds her a group of goldsmiths who make her a sparkling crown and scepter.
Malka learns that she has entered the Bezalel art school where students learn to sculpt, draw, weave, and create a variety of crafts. The school was named after the artist mentioned in the Bible who helped design the original Temple in Jerusalem. The art students ask Malka if they can paint pictures of her wearing her special new Queen Esther costume. She sits regally as they paint her portrait in a variety of styles. She now feels like an actual malka, a real queen, and is ready to celebrate Purim.
An author’s note tells the story of the real-life Boris Schatz who founded Bezalel Academy in 1906. The school is still training artists today.
As befits a story about art and artists, the book is charmingly illustrated in subtle color and will give readers a good feel for Jerusalem.
Recommended for ages 3 to 8.” – Jewish Book Council

Tami Shem-Tov was born in Kiryat Ono, Israel, and lives in Tel Aviv. She teaches creative writing at the University of Haifa. Her previous children's books have won many awards, including an Andersen Honor and the Bialik Prize.

Rachella Sandbank is the children's and young adult books editor at Keter Books, one of the leading publishing houses in Israel. She lives in Hod HaSharon, Israel.

Illustrator and animation director Avi Ofer creates projects for a variety of media, including book and editorial illustration as well as direction of animated films. He has exhibited in art shows and screened in festivals around the world. He lives in Barcelona, Spain.