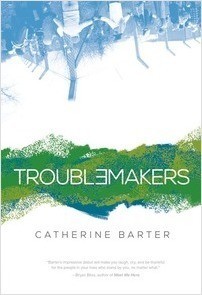 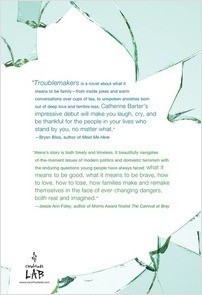 When she was three, Alena’s activist mother died. She’s been raised by her half-brother and his boyfriend in East London, which is being targeted by a lone bomber. Alena desperately wants to know about her mother, but her brother won’t tell her anything.

Alena’s played by the rules all her life, but that’s over. When she starts digging up information herself and does something that costs her brother his job and puts the family in jeopardy, Alena discovers she can be a troublemaker—just like her mother.

Now she must figure out what sort of trouble she’s willing to get into to find out the truth.

“Readers will root for Alena. . . . [Give] to readers who like contemporary settings and issues.”—VOYA

“Catherine Barter’s debut YA novel is a tense, subtle work about family and bringing secrets to light.”—Shelf Awareness

“Barter’s novel should appeal to a wide audience for its emotional honesty and its complex characters and relationships.”—Publishers Weekly

“Alena’s story is both timely and timeless. It beautifully navigates of-the-moment issues of modern politics and domestic terrorism with the enduring questions young people have always faced: what it means to be good, what it means to be brave, how to love, how to lose, how families make and remake themselves in the face of ever-changing dangers, both real and imagined.”—Jessie Ann Foley, author of Morris Award Finalist The Carnival at Bray

“Troublemakers is a novel about what it means to be family—from inside jokes and warm conversations over cups of tea, to unspoken anxieties born out of deep love and terrible loss. Catherine Barter’s impressive debut will make you laugh, cry, and be thankful for the people in your lives who stand by you, no matter what.”—Bryan Bliss, author of National Book Award Longlist selection We’ll Fly Away

Catherine Barter grew up in Stratford-upon-Avon, a market town in the middle of England best known as Shakespeare's birthplace. When she was eighteen I moved to Norwich to study American literature at university, and stayed there for the next ten years (except for one year living in Plattsburgh, New York). She has worked in libraries, bookshops, universities and an organization campaigning for the rights of garment workers. Currently she lives in East London and co-manages Housmans, a radical bookshop in King's Cross.