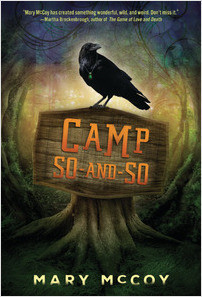 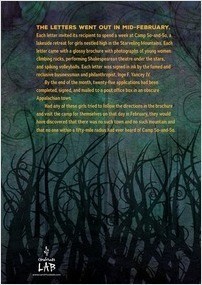 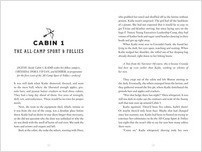 The letters went out in mid-February.

Each letter invited its recipient to spend a week at Camp So-and-So, a lakeside retreat for girls nestled high in the Starveling Mountains. Each letter came with a glossy brochure with photographs of young women climbing rocks, performing Shakespearean theatre under the stars, and spiking volleyballs. Each letter was signed in ink by the famed and reclusive businessman and philanthropist, Inge F. Yancey IV.

By the end of the month, twenty-five applications had been completed, signed, and mailed to a post office box in an obscure Appalachian town.

Had any of these girls tried to follow the directions in the brochure and visit the camp for themselves on that day in February, they would have discovered that there was no such town and no such mountain and that no one within a fifty-mile radius had ever heard of Camp So-and-So.

“The DNA of this singular book winds strands of M. C. Escher, Joss Whedon, and Heathers—Mary McCoy has created something wonderful, wild, and weird. Don’t miss it.”—Martha Brockenbrough, author of The Game of Love and Death

“[E]nthralling, funny, and surprisingly thoughtful. . . . A series of mysteries, a diverse and ambitious large cast, satisfying villains, and memorable notes on friendship—there’s a lot to like here.”—The Bulletin of the Center for Children’s Books

“Put this on the shelf in the YA collection. It will be read.”—VOYA

“All the world’s a stage in this . . . crafty, and, yes, campy novel that plays with familiar themes before it subverts them. Pure weird entertainment from start to finish.”—starred, Booklist

“McCoy has written a downright peculiar book that manages to deliver a compelling tale of friendship and survival. . . . Weird, fun, clever, and different—in a good way.”—Kirkus Reviews

“A wildly imaginative novel with plenty of twists, this is a good pick for teens who like stories filled with bravery and dark magic.”—School Library Journal

“The DNA of this singular book winds strands of M. C. Escher, Joss Whedon, and Heathers—Mary McCoy has created something wonderful, wild, and weird. Don’t miss it.”—Martha Brokenbrough, author of The Game of Love and Death

Mary McCoy lives in Los Angeles with her husband and son. She works as a librarian at the Los Angeles Public Library. She is the author of Printz Honor Book I, Claudia.

By Megan Ciskowski, Associate Publicist Happy Book Birthday to May new releases from Lerner Publishing Group! Middle Grade The Art of Magic: A Novel by Hannah Voskuil When ZuZu and Andrew discover a set of enchanted art supplies that allow them to create magical creatures, they find… View →