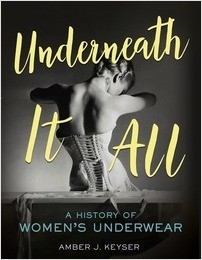 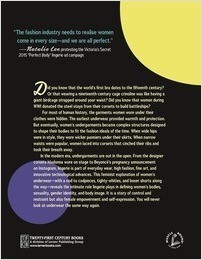 A History of Women's Underwear

For most of human history, the garments women wore under their clothes were hidden. The earliest underwear provided warmth and protection. But eventually, women’s undergarments became complex structures designed to shape their bodies to fit the fashion ideals of the time.

In the modern era, undergarments are out in the open, from the designer corsets Madonna wore on stage to Beyoncé’s pregnancy announcement on Instagram. This feminist exploration of women’s underwear reveals the intimate role lingerie plays in defining women’s bodies, sexuality, gender identity, and body image. It is a story of control and restraint but also female empowerment and self-expression. You will never look at underwear the same way again.

“[A] natural subject with which to explore women’s self-image and the ways the male gaze has shaped it over the centuries.”—VOYA

“[A]n engaging read for anyone with an overflowing underwear drawer and a useful resource for teens . . .”—The Bulletin of the Center for Children’s Books

“This multidisciplinary, discussion-worthy text reshapes how we view history.”—Booklist

“A serviceable introduction to the history of women’s undergarments, with some nuggets of importance and insight.”—Kirkus Reviews