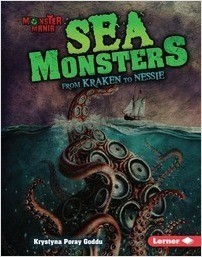 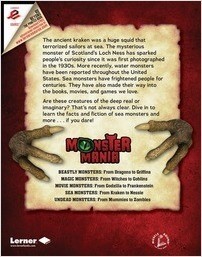 From Kraken to Nessie

From the Series Monster Mania

The ancient kraken was a huge squid that terrorized sailors at sea. The famous and mysterious monster of Scotland’s Loch Ness has sparked people’s curiosity since it was first photographed in the 1930s. More recently, water monsters have been reported in lakes and rivers throughout the United States. Sea monsters such as these have frightened people for centuries. They have also made their way into the books, movies, and games we love. Are these creatures of the deep real or imaginary? That’s not always clear. Dive in to learn the facts and fiction of sea monsters and more . . . if you dare!

“Promises to be monstrously popular among upper elementary and middle schoolers.”—School Library Journal

This high-interest series covers the always-popular topic of monsters. Each title features a high-profile monster type, covering their history, role in pop culture, and more. What are the best movies about sea monsters? What have Bigfoot expeditions uncovered? Why do some sports teams… View available downloads →