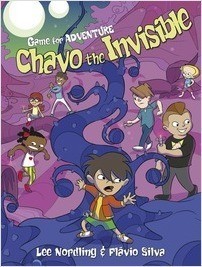 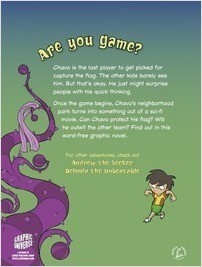 From the Series Game for Adventure

Chavo is the last player to get picked for capture the flag. But that’s okay. Chavo’s small, but he just might surprise people with his quick thinking. Can Chavo protect his flag? Will he outwit the other team? Find out in this word-free graphic novel, the third installment in the Game for Adventure series.

Chavo the Invisible is the third installment of writer Lee Nordling’s ‘’Game For Adventure” series of wordless mini-graphic novels, following Andrew the Seeker and Belinda the Unbeatable. It’s his first with artist Flavio Silva, as Patty Cake‘s Scott Roberts drew the two previous installments. If you missed either of those, there’s no reason to worry; Chavo is just as self-contained and standalone. The only thing the books share is their concept and, to a degree, members of their little kid casts, with the stars of some books playing minor roles in the others.

That concept is, admittedly, a very simple one, but that very simplicity lends it both a universality and most of its punch. In each ’’Game For Adventure’’ book, the title child is the star in an epic instance of some fairly common childhood game, in which the mundane surroundings of the kids’ school or neighborhood melt away and are replaced by a more fantastical setting. The game itself becomes something much more. So Andrew played hide-and-seek with a monster, and Belinda and her classmates played musical chairs on an arcade-like obstacle course in which the musical notes attacked them. And now Chavo plays capture the flag in the park.

This is probably the most exciting of the three—which I realize might not be saying too much given how similar they all are—due to the fact that there’s a bit of ironic drama built into the story and, well, capture the flag is a lot more fun and complex a game than musical chairs is, you know? There’s a reason why kids continue to play capture the flag later in their lives than they do musical chairs.

As for the drama, Chavo is the first one at the park to play, getting there with his flashlight while it’s still quite sunny and bright out. Gradually night falls and more and more kids come. The two biggest kids are captains, and they begin picking their teams. Chavo is the last one picked…almost as if he’s invisible, and the team captains can’t even see him standing there.

Once the sides are picked and the flags placed in their spots, the park turns into an alien landscape—half purple and half blue, denoting the territory of the two factions—and populated with alien fauna. The flashlights become high-tech, handheld lasers; when the laser beam hits a victim, they freeze in place, a little force field appearing around them to signify that they are in stasis.

In rather short order, everyone on Chavo’s team is frozen…except Chavo. And then the game essentially becomes a 10-to-one match between all of Team Purple and Chavo. He proves to be action-movie awesome at the game, devising elaborate traps and tricks, dodging paralysis rays, outrunning everyone, and even hiding with ninja-like stealth…almost as if he’s invisible.

The change in artists likely won’t be too terribly apparent to readers, even older ones, unless they are reading the books in pretty close proximity to one another. I liked Silva’s rendering a bit more than Roberts’, as he has a smoother style and his characters have a more animated look to them, but stylistically, he barely moves from the aesthetic Roberts established previously.

Given the wordless nature of the stories—there’s not even a sound effect or pictograph in this one—the storytelling is all on the artist, and so the fundamentals of comics are vastly more important than the design or rendering. That part both artists handle well.

As with the other ‘’Game For Adventure’’ comics, Chavo manages to crystallize a feeling from childhood, a visualization of play, in which a set of rules, steps, and actions are transformed through imagination into something incredible.

Two-time Eisner nominee Lee Nordling is an award-winning writer, editor, and creative director who has worked on staff at Disney Publishing, DC Comics, and Nickelodeon Magazine. His book The Bramble won the 2013 Moonbeam Gold Medal for Picture Books (ages 4-8), and BirdCatDog, an Eisner Award nominee, was chosen by Kirkus Reviews as one of the best children's books of 2014, and won the Moonbeam Spirit Award for Imagination. The third book in his Three-Story Book series, SheHeWe, was a 2016 Eisner Award nominee. His current Game for Adventure series—beginning with Andrew the Seeker, and Belinda the Unbeatable, the latter garnering two starred reviews from Booklist and Kirkus—concludes in Spring 2018 with Chavo the Invisible. He lives in Sacramento, California with his wife, Cheri, and numerous pets that earn their kibble by offering inspiration.