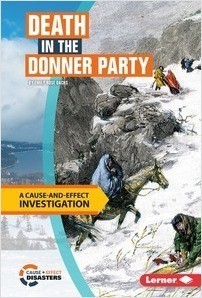 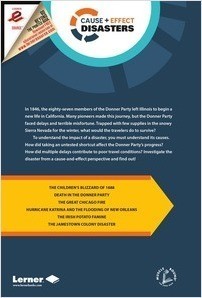 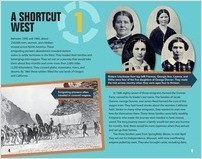 Death in the Donner Party

From the Series Cause-and-Effect Disasters

In 1846, the eighty-seven members of the Donner Party left Illinois to begin a new life in California. Many pioneers made this journey, but the Donner Party faced delays and terrible misfortune. Trapped with few supplies in the snowy Sierra Nevada for the winter, what would the travelers do to survive?

To understand the impact of a disaster, you must understand its causes. How did taking an untested shortcut affect the Donner Party’s progress? How did multiple delays contribute to poor travel conditions? Investigate the disaster from a cause-and-effect perspective and find out!

“[W]ithout being too gratuitous, gory, or sensational . . . [this series] will help students understand the impact of each disaster on history. . . . A strong choice for pleasure reading and report writing.”—School Library Journal, Series Made Simple

“In addition to highlighting a notable event, this slim volume encourages a critical-thinking approach to examining history.”—Booklist

Grades 1 – 3, Grades 4 – 5: This nonfiction book gave me a much better understanding of how the Donner Party ran into so many problems as they were immigrating to California. They first decided to take Lansford Hastings shortcut which was suppose to take 350-400 miles off their trip. They had the guide for this shortcut and Landford said he would be there to help them through. When they got to the cut off Landford was not there. They sent some scouts to find him. When they did, Landford said do not go the way he said it was to hard. He told them another way but would not travel with them. They went the next way but ran into trouble with not having any water. One problem after another, they were in the Sierra and got stuck in stow storm and the pass was closed. By the time the made it to California almost half of their party died along the way. This was way different from most emigration camps that lost around 6% of their party.

Verdict: I gave this book a R rating, because it made it so easy to understand all the problems the Donner Party had.

Emily Rose Oachs graduated with a degree in communication studies. She now works as a freelance writer and editor and has authored more than thirty nonfiction books for children and young adults. She lives in Los Angeles.

Provide readers with a deeper understanding of history through a cause-and-effect analysis of well-known disasters. What decisions were made, what shortcuts were taken, or what heroic acts led to the ultimate outcomes? Even the most reluctant readers won’t be able to resist… View available downloads →