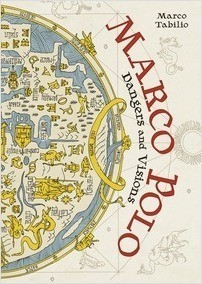 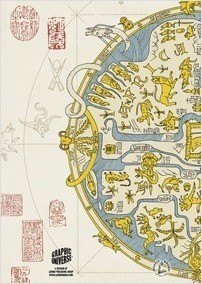 The son of a traveling merchant, Marco Polo spent his early years among the ports of Venice, Italy. As a young man, he headed eastward with his father and his uncle toward the lands of the Mongol emperor Kublai Khan. Their journey from Europe into Asia, marked by risks, setbacks, and discoveries, transformed every person involved. It also led to one of the world’s most studied and most debated travelogues.

Marco Tabilio, an emerging talent of Italian cartooning, creates a graphic novel in the form of a puzzle and finds the coming-of-age tale within the legend of Marco Polo.

“In this lush graphic novel import, Tabilio makes a virtue of uncertainty. . . . [G]raphic novel readers accustomed to nonlinear, image-dependent storytelling will be right at home puzzling out the boundaries between imagination and reality and reveling in Tabilio’s intricate faux-antique maps . . .”—starred, The Bulletin of the Center for Children’s Books

“Tabilio distills the essence of the story, capturing all of its wonder and exoticism without losing its grand sweeping nature.”—The Horn Book Magazine

“©aptures the excitement and spirit of exploration that have kept Polo’s name and stories relevant, even as the world seems to get smaller.”—starred, Foreword Reviews

“[A]n effective introduction to the explorer. . . Useful as a supplemental text in art, history, geography, or literature classrooms, and recommended as an additional purchase for large graphic novel collections.”—School Library Journal

Marco Tabilio is an Italian comic author. He spent the past few years in Hamburg and Lake Garda. His comics have appeared in magazines and exhibitions in Italy and Germany. Marco Polo: Dangers and Visionsis his first graphic novel and has been published in three different languages.