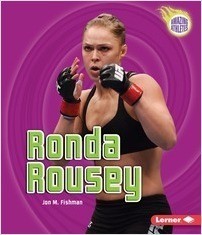 Mixed martial arts (MMA) star Ronda Rousey is known for her incredible record of twelve wins and one loss and has been ranked the world’s top fighter in her weight class. With nine of her twelve wins taking place in under a minute, Ronda is considered one of MMA’s biggest superstars. Her journey to success started at the 2008 Olympics, where she won a bronze medal in judo. Learn more about how this impressive fighter became known as one of the most dominant athletes of our time.