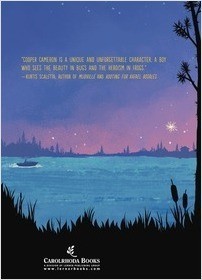 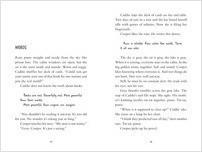 The Notations of Cooper Cameron

Eleven-year-old Cooper Cameron likes things to be in order. When he eats, he chews every bite three times on each side. Sometimes he washes his hands in the air with invisible water. He invented these rituals after the death of his beloved grandfather to protect others he loves from terrible harm.

But when Cooper’s behavior drives a wedge between his parents, and his relationship with his older sister, Caddie, begins to fray, his mother’s only solution is to take Cooper and Caddie to the family cabin for the summer.

Armed with a collection of rocks, his pet frog, and his notebook, Cooper vows to cure himself and bring his damaged family back together.

“O’Reilly’s rhythmic prose is evocative in its cadence and repetition, giving Cooper’s struggle against his compulsions a poignant immediacy . . .”—The Bulletin of the Center for Children’s Books

“[T]akes readers into the mind of a character affected by OCD. . . . [A] perceptive character study within a quiet, involving novel.”—Booklist

“[A] nuanced and empowering narrative that uplifts rather than undermines Cooper’s unique perspective on his world. . . . Intricate, meticulous, unforgettable.”—starred, Kirkus Reviews

“An unforgettable, much-needed story; a strong purchase for all collections.”—starred, School Library Journal

“Cooper Cameron is a unique and unforgettable character, a boy who sees the beauty in bugs and the heroism in frogs.”—Kurtis Scaletta, author of Mudville and Rooting for Rafael Rosales

Jane O'Reilly is the author of the acclaimed middle grade novels, The Secret of Goldenrod and The Notations of Cooper Cameron. She is the recipient of a McKnight Fellowship in Screenwriting and also holds an MFA in Writing for Children and Young Adults from Hamline University in St. Paul, Minnesota. The youngest of five children, she grew up in an old house, enjoyed her early summers traveling the USA and Mexico on family road trips, and spent her teenage summers in the North Woods at the cabin her grandfather built. Curious about nearly everything, Jane and her stories are inspired by small towns, old houses and the universal need for hope. Although born and raised in Minnesota, Jane and her husband, John, and dog, Poppy, now call Des Moines, Iowa, home.