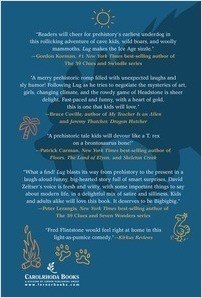 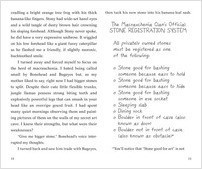 Dawn of the Ice Age

From the Series Lug

A hilarious middle-grade novel about a misunderstood caveboy perfect for fans of Ice Age and Happy Feet.

Lug is a caveboy who would rather paint than club other caveboys. The clan even mocks him, calling him “Little Slug.” Like all the other caveboys, Lug must enter the contest to become the clan’s next Big Man and attempt to catch the Biggest Beast—even though he would much rather spend his days painting in his secret art cave.

When Lug is banished for failing to catch a jungle llama, he thinks he is alone in the world but finds others who believe in him: his clanmate Stony, and a new friend, Echo, a girl from a rival clan who can talk to animals and just may be prehistory’s first vegetarian/animal rights activist. Together they face even bigger challenges—Lug discovers the Ice Age is coming and he has to bring the warring clans together to save them not only from the freeze but also from a particularly unpleasant migrating pride of saber-toothed tigers. It’s no help that the elders are cavemen who can’t seem to get the concept of climate change through their thick skulls.

With funny, anachronistic humor and charming characters, Lug, Dawn of the Ice Age is sure to be a hit with many readers.

“Fred Flintstone would feel right at home in this light-as-pumice comedy.” —Kirkus Reviews

David Zeltser is the author of the Lug series, Ninja Baby, Stinker, and The Universe Ate My Homework. He studied physics at Harvard and was fortunate to co-author a paper with the world renowned physicist Howard Georgi. Now David writes children's books, graphic novels, and screenplays and lives with his family and many barking sea lions in Santa Cruz, California. Follow him on Twitter (@davidzeltser) and at www.davidzeltser.com.