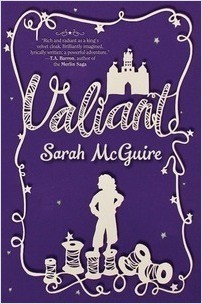 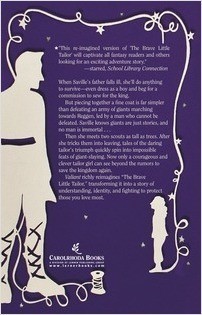 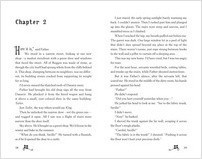 Saville hates sewing. How can she not when her father, the Tailor, loves his bolts of velvet and silk far more than he’s ever loved her? Yet, when he is struck ill shortly after they arrive in the city of Reggen, Saville must don boy’s clothes in the hopes of gaining a commission from the king to keep them fed. The kingdom is soon on edge when stories spread of an army of giants led by a man who cannot be killed. But giants are just stories, and no man is immortal.

And then the giants do come to the city gates, two larger-than-life scouts whom Saville cunningly tricks into leaving. The Tailor of Reggen is the hero of the kingdom, the king promises his sister’s hand in marriage, and by the time Saville reaches the palace doors, it is widely known that the Tailor single-handedly killed the giants. When her secret—that she’s a girl—is quickly discovered by Lord Galen Verras, the king’s cousin, Saville’s swept into the twists and turns of court politics.

The deathless man is very real, and he will use his giant army to ensure he is given the throne freely or by force. Now, only a tailor girl with courage and cunning can see beyond the tales to discover the truth and save the kingdom again.

Debut author Sarah McGuire artfully crafts a story of understanding, identity, and fighting to protect those you love most in Valiant, a rich reimagining of “The Brave Little Tailor.”

“This re-imagined version of ‘The Brave Little Tailor’ will captivate all fantasy readers and others looking for an exciting adventure story. . . . [I]t will stand alone in any collection.”—starred, School Library Connection

“Featuring a strong, brave, and determined female protagonist, royalty, and giants, it’s a debut novel that’s perfect for fans of Shannon Hale and Gail Carson Levine. Who doesn’t love a love story built on trust in the face of danger?”―Booklist

“McGuire gives her ambitious retelling of the Grimms’ tale of the Brave Little Tailor a solid dose of girl power….[H]er heroine brings verve to a familiar story.”―Publishers Weekly

“Characters are fully developed through Saville’s engaging first-person voice, but it’s clever Saville herself who wins the day—and the heart of the nobleman. A charming, satisfying first novel.” —Kirkus Reviews

Sarah McGuire is a nomadic math teacher who sailed around the world aboard a floating college campus. She writes fairy tale retellings and still hopes that one day she'll open a wardrobe and stumble into another world. Coffee and chocolate are her rocket fuel. She wishes Florida had mountains, but she lives there anyway with her husband (who wrote this bio in less than three minutes!) and their family.