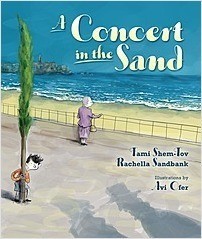 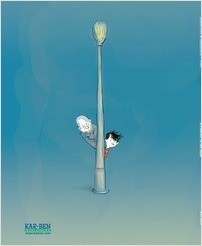 “This fictional account of the first performance by what was to become the Israel Philharmonic
Orchestra (IPO), in December 1936, features presumably Hebrew-speaking Uri and his Germanspeaking
grandmother. She plucks Uri from a day of boredom and leads him through Tel-Aviv with
an undisclosed destination. He wonders about his grandmother’s intentions and thoughts along
their wordless journey, as they observe a growing parade of people heading in the same direction,
including some ‘carrying funny-shaped cases.’ When the crowd ultimately gathers at a beach side
auditorium, musical instruments emerge from those cases and musicians begin to play, under the
direction of Grandma’s friend, ‘Mr. Huberman,’ and conducted by Arturo Toscanini. The musical
experience is filled with magic for Uri and emotion for Grandma. An historical note includes two
photographs from the era, and an explanation of how violinist Bronislaw Huberman, recognizing the
dangerous Nazi expulsion of Jewish musicians from German orchestras, traveled through Europe
to assemble 70 top Jewish musicians and create the IPO. The soft pen and ink illustrations include
clever nods to Jewish literature and culture in Hebrew lettering in street scenes, and beautifully
compliment Uri’s adventure through the city. The story is sure to inspire further exploration of this
momentous event and fascinating history of the IPO.”—Association of Jewish Libraries

“Brown-capped construction workers eating ryebread sandwiches; seltzer stands in the street, Hebrew posters in faintly familiar (but strangely undeveloped) streets…it is 1936 and Uri sits, bored, in his parents’ deli
in Tel Aviv, unaware he is soon to attend the first performance of the future Israel Philharmonic Orchestra, escorted by his German-speaking grandma. A Concert in the Sand, by Tami Shem-Tov and Rachella
Sandbank (Kar-Ben, £6.50) is textheavy for a picture book, so would suit a five- to seven-year-old, while Avi Ofer’s detailed crowd scenes are almost a historical Where’s Wally?”—The Jewish Chronicle (UK)

“This warm, delicious, slim volume is bona fide historical fiction about the first concert by the orchestra that will become the Israel Philharmonic. Humor laced mobile illustrations support the story of a mysterious walk that Uri, a young boy, takes with his grandmother in Tel Aviv in December 1936. The unfolding plot keeps youngsters engaged in the mystery surrounding the outing: where is grandma going? What are those men carrying in those funny shaped cases? As the grandson walks, he spies and seeks clues. We learn that grandma is a German-Jewish refugee from Nazism, safe but homesick in Palestine. She knows music and some of the musicians, especially the man who created this orchestra, violinist Bronislaw Huberman. He saved the lives of 70 musicians by taking them to play outside Europe. (The picture book itself does not delve into this sad Holocaust reason to start the orchestra, but the end note skims it.) Uri meets Huberman and gains a new, prideful view of his grandparent. Told in the first person by Uri, the picture book reveals not only his walk and the solution to his questions about the strangers, but his great relationship with his grandmother, the denizens of developing Tel Aviv and the emotional power of music; yes a teary eyed ending. By the end of the walk, the two are leading a parade of fisherman, construction workers, sales people, shoppers and sidewalk strollers into the auditorium. Arturo Toscanini is the conductor who brings the music from Uri’s ears to his heart: not to be missed by readers ages 4-9.”—Jewish Book Council

Rachella Sandbank is the children's and young adult books editor at Keter Books, one of the leading publishing houses in Israel. She lives in Hod HaSharon, Israel.

Tami Shem-Tov was born in Kiryat Ono, Israel, and lives in Tel Aviv. She teaches creative writing at the University of Haifa. Her previous children's books have won many awards, including an Andersen Honor and the Bialik Prize.

Illustrator and animation director Avi Ofer creates projects for a variety of media, including book and editorial illustration as well as direction of animated films. He has exhibited in art shows and screened in festivals around the world. He lives in Barcelona, Spain.