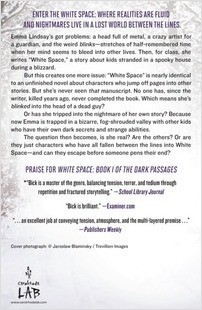 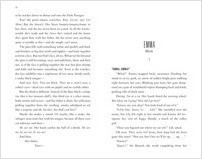 From the Series The Dark Passages

In the tradition of Memento and Inception comes a thrilling and scary young adult novel about blurred reality where characters in a story find that a deadly and horrifying world exists in the space between the written lines.

Emma Lindsay has problems: no parents, a crazy guardian, and all those times when she blinks away, dropping into other lives so surreal it’s as if the story of her life bleeds into theirs. But one thing Emma has never doubted is that she’s real.

Then she writes “White Space,” which turns out to be a dead ringer for part of an unfinished novel by a long-dead writer. In the novel, characters travel between different stories. When Emma blinks, she might be doing the same.

Before long, she’s dropped into the very story she thought she’d written. Emma meets other kids like her. They discover that they may be nothing more than characters written into being for a very specific purpose. What they must uncover is why they’ve been brought to this place, before someone pens their end.

“Readers will be captivated by the entwined storylines and eerie mystery.” —Library Media Connection

“This is a fascinating, intricate story with multiple threads running through it. It is a combination of mystery, science fiction, and horror—an exciting page-turner.” —starred, The Bulletin of the Center for Children’s Books

“One of the marks of a classic horror story is the slow and insidious shifting of the rules within the tale’s universe….Bick is a master of the genre, balancing tension, terror, and tedium through repetition and fractured storytelling.” —School Library Journal

Ilsa J. Bick is a child psychiatrist, as well as a film scholar, surgeon wannabe, former Air Force major, and an award-winning, best-selling author of short stories, e-books, and novels. She has written extensively in the Star Trek, Battletech, Mechwarrior: Dark Age, and Shadowrun universes. Her original stories have been featured in numerous anthologies, magazines and online venues. Ilsa's YA paranormal, Draw the Dark, was also a semifinalist for the 2009 Amazon Breakthrough Novel Award (as Stalag Winter). Ilsa currently lives with her family and other furry creatures in rural Wisconsin and across the street from the local Hebrew cemetery. One thing she loves about the neighbors: They're very quiet and come around for sugar only once in a blue moon. 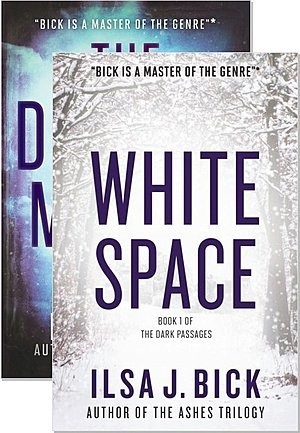