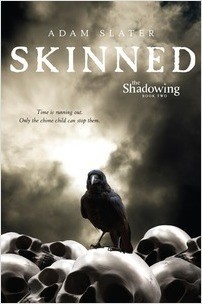 From the Series The Shadowing

Filled with bloodcurdling twists and turns, this sequel to Hunted will draw readers into a world of terror.

The Shadowing draws near . . .

After learning that he is the last chime child, the only one who can protect the human world from demons, Callum turns to his friends Jacob and Melissa for help. Jacob is a ghost who teaches Callum to control his powers; Melissa shares her extensive knowledge of the supernatural. But with the Shadowing quickly approaching, Callum is faced with an unexpected problem. One of the Netherworld demons has surfaced early and is feeding on the flesh of young children to gain strength. Now Callum must stop this monster without becoming her next victim. . . .

“Slater has woven a fast-paced plot full of action and suspense. Great characters coupled with an eerie setting make for a terrifying horror story that readers will absolutely love.” —School Library Journal

“Slater’s nightmarish atmosphere, packed with ghosts, a sinister coven, misty graveyards, and ruined churches, is an unforgettable character in itself. Mildly gory, it’s a page-turner for those who prefer paranormal to romance.” —Booklist