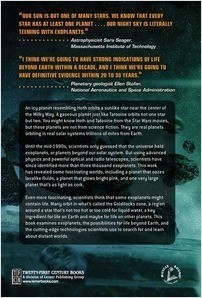 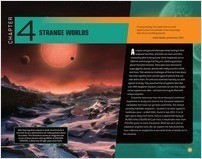 Worlds beyond Our Solar System

Until the mid-1990s, scientists only guessed that the universe held exoplanets, or planets beyond our solar system. But using advanced physics and powerful telescopes, scientists have since identified more than three thousand exoplanets. This work has revealed fascinating worlds, including a planet that oozes lavalike fluids and a planet that glows bright pink.

Even more fascinating, scientists think that some exoplanets might contain life. Many orbit in the Goldilocks zone, the region around a star that’s not too hot or too cold for liquid water, a key ingredient for life. This book examines exoplanets, the possibilities for life beyond Earth, and the cutting-edge technologies scientists use to learn about distant worlds.

“Perfect for outer space enthusiasts and out of this world for report writers.”—School Library Journal

“An enticing overview of tools, techniques, and discoveries in what the author rightly characterizes ‘a red-hot field in astronomy.’ . . . [Readers] will come away satisfied and intrigued.”—Kirkus Reviews