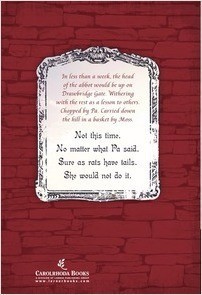 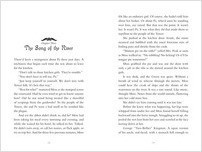 All her life, Moss has lived in the Tower of London with her father, who serves as the executioner for King Henry VIII. Prisoners condemned to death must face Pa and his axe—and Moss catches their severed heads. Her father insists he has no choice: if he leaves the Tower, he will be killed. But Moss can’t bear to be the executioner’s daughter any longer. When she finally finds a way out of the Tower, she discovers the river holds more dangers than she imagined—including the Riverwitch’s curse. The Riverwitch once helped Moss’s family in exchange for a terrible bargain; now she expects Moss to pay the debt.

“Hardstaff imbues her debut novel with rich, sensory language. . . . ©lever Moss’ compelling story is a gratifying one, and kids who love spooky, grim tales will easily be lured in.”—Booklist

“Hardstaff’s debut is a fast-moving and suspenseful adventure . . . [that] believably conveys the gritty details of life on the edge in the context of historical events of the era.”―Publishers Weekly

“Hardstaff weaves a coming-of-age story set in Tudor England with folklore about a Riverwitch. . . . The Riverwitch folklore and the suspense that it creates, along with the themes of love and family, strengthen Moss’s story. . . .®eaders who enjoy history and folklore will learn about Tudor England through a commoner’s eyes in this British import.”—School Library Journal

“[Hardstaff] excels with her depiction of Tudor England, offering lavish descriptions of clothing and food . . . and a slew of stench and grime. . . . A richly detailed debut with a classic feel, full of grit, gore, and gilt.”—Kirkus Reviews

“The author creates an accurate and interesting historical setting in a tumultuous time. Details of harsh life, religious strife, and political intrigue in the king’s court educate while moving the plot seamlessly. . . . This paranormal and historical novel is good reading.”—VOYA

Jane Hardstaff is a TV producer who lives in London, England, near the River Thames. When she is not working as a TV producer, Jane enjoys writing novels for young readers.