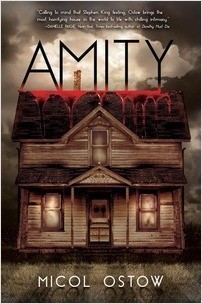 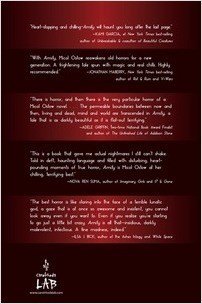 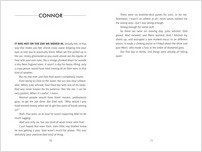 Here is a house of ruin and rage, of death and deliverance.
Here is where I live, not living.
Here is always mine.

When Connor’s family moves to Amity, a secluded house on the peaceful banks of New England’s Concord River, his nights are plagued with gore-filled dreams of demons, destruction, and revenge. Dreams he kind of likes. Dreams he could make real, with Amity’s help.

Ten years later, Gwen’s family moves to Amity for a fresh start. Instead, she’s haunted by lurid visions, disturbing voices, and questions about her own sanity. But who would ever believe her? And what could be done if they did?

Because Amity isn’t just a house. She is a living force, bent on manipulating her inhabitants to her twisted will. She will use Connor and Gwen to bring about a violent end as she’s done before.

Inspired by a true-crime story, Amity spans generations to weave an overlapping, interconnected tale of terror, insanity, danger, and death.

“The refreshing lack of romance enhances the claustrophobic atmosphere, and while the foreshadowing gives away a lot, the conclusion still surprises.” —Kirkus Reviews

“Amity is a fast-paced read filled with horror and suspense.” —Library Media Connection

“A page-turning thriller, Amity will have readers begging to keep the lights on at night.” —VOYA

Micol Ostow has been writing professionally since 2004, and in that time has written and/or ghostwritten over 40 published works for young readers. She started her reign of terror with Egmont with her novel family, which Elizabeth Burns named a favorite of 2012 on her School Library Journal-syndicated blog, A Chair, a Fireplace, a Tea Cozy. Micol's graphic novel, So Punk Rock (and Other Ways to Disappoint Your Mother), was named a 2009 Booklist Top Ten Arts Books for Youth Selection, a Booklist Top Ten Religion Books for Youth Selection, and a Sydney Taylor Notable Book for Teens. She received her MFA in Writing for Children and Young Adults from the Vermont College of Fine Arts, and currently teaches a popular young-adult writing workshop through MediaBistro.com.