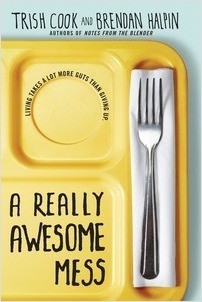 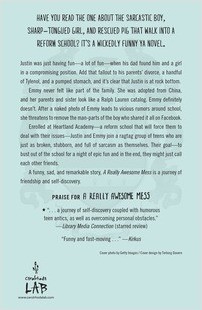 After his parents’ divorce, Justin is on rocky mental ground. But when a handful of Tylenol lands him in the hospital, he has really hit rock bottom.

A scandalous photo of Emmy leads to vicious rumors around school, but things get worse when she threatens the boy who started it all on Facebook.

Justin and Emmy arrive at Heartland Academy, a reform school that will force them to deal with their issues. Along the way they will find a ragtag group of teens who are just as broken, stubborn, and full of sarcasm as themselves.

A funny, sad, and remarkable story, A Really Awesome Mess is a journey of friendship and self-discovery.

“[A] journey of self-discovery coupled with humorous teen antics, as well as overcoming personal obstacles. This book touches on relevant teen issues such as cyberbullying, adoption, eating disorders, anger problems, suicide, and depression. It offers hope to those who are facing some of these same issues.” —starred, Library Media Connection

“Alternating between scenes of broad humor and deep emotion, the authors present a realistic perspective on the flaws we all carry with us, and the way friendships can form and strengthen under any circumstances.” —VOYA

“The bawdy, witty, and sarcastic style balances out the intense therapy discourse and the pensive self-reflection found elsewhere in this irreverent take on mental health, recovery, and wellness.” —Booklist

Trish Cook is the author of four young adult novels, including Notes from the Blender and A Really Awesome Mess, and a graduate of the University of Chicago's Graham School program in Creative Nonfiction. Her essays have been seen most recently in the Manifest-Station, Graze Magazine, and Spittoon. Trish is currently in the process of putting the final touches on her memoir/essay collection. In her spare time, she rows with a masters crew, most recently competing in Masters Nationals and the Head of the Charles Regatta. Trish dreams of being on The Amazing Race, but the closest she's ever come was being chosen as a finalist for casting on I Survived a Japanese Game Show (and unfortunately did not survive that last casting cut). You can visit her at www.trishcook.com and www.instagram.com/instafromthe80s.