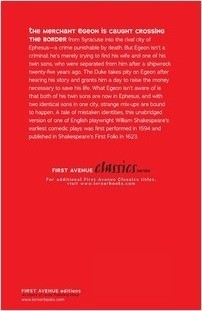 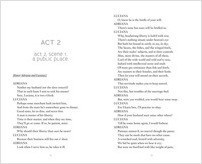 The Comedy of Errors

The merchant Egeon is caught crossing the border from Syracuse into the rival city of Ephesus—a crime punishable by death. But Egeon isn’t a criminal; he’s merely trying to find his wife and one of his twin sons, who were separated from him after a shipwreck twenty-five years ago. The Duke takes pity on Egeon after hearing his story and grants him a day to raise the money necessary to save his life. What Egeon isn’t aware of is that both of his twin sons are now in Ephesus, and with two identical sons in one city, strange mix-ups are bound to happen. A tale of mistaken identities, this unabridged version of one of English playwright William Shakespeare’s earliest comedic plays was first performed in 1594 and published in Shakespeare’s First Folio in 1623.