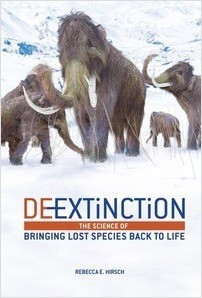 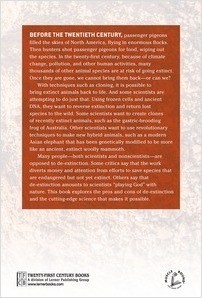 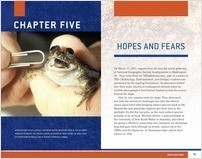 The Science of Bringing Lost Species Back to Life

In the twenty-first century, because of climate change and other human activities, many animal species have become extinct, and many others are at risk of extinction. Once they are gone, we cannot bring them back—or can we?

Many people are opposed to de-extinction. Some critics say that the work diverts attention from efforts to save species that are endangered. Others say that de-extinction amounts to scientists “playing God.” Explore the pros and cons of de-extinction and the cutting-edge science that makes it possible.

“A thought-provoking STEM title for research and debate.”—Booklist

“A staid but intellectually stimulating excursion across one of modern biology’s most promising, and controversial, frontiers.”—Kirkus Reviews

Written especially for young adults, yet utterly fascinating for readers of all ages to browse, De- extinction: The Science of Bringing Lost Species Back to Life is about advances in scientific technology to potentially bring back animal species that have gone extinct. A real-life “Jurassic Park” scenario doesn’t exist yet, but projects to clone recently extinct animals, such as the gastric- brooding frog of Australia, are underway. Alternatively, it may be able to hybridize or genetically modify living animals to make them more like extinct animals, such as a modern Asian elephant that resembles the extinct woolly mammoth. A wealth of full-color photography, a glossary, a bibliography, and an index enrich this ey-opening introduction to a potential revolution of the natural order. Highly recommended, especially for high school and public library collections.

Rebecca E. Hirsch, PhD, is the author of numerous books about science, nature, and geography for children. She lives with her husband and three children in State College, Pennsylvania. You can visit her online at rebeccahirsch.com.