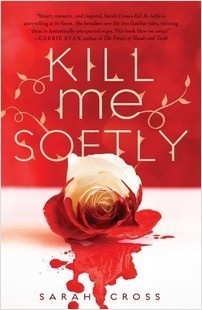 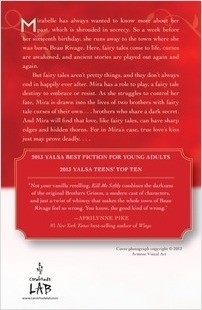 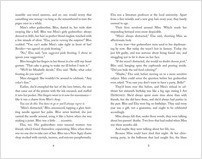 Mirabelle’s past is shrouded in secrecy, from her parents’ tragic deaths to her guardians’ half-truths about why she can’t return to her birthplace, Beau Rivage. Desperate to see the town, Mira runs away—and discovers a world she never could have imagined.

In Beau Rivage, nothing is what it seems—the strangely pale girl with a morbid interest in apples, the obnoxious playboy who’s a beast to everyone he meets, and the chivalrous guy who has a thing for damsels in distress. Here, fairy tales come to life, curses are awakened, and ancient stories are played out again and again.

But fairy tales aren’t pretty things, and they don’t always end in happily ever after. Mira has a role to play, a fairy tale destiny to embrace or resist. As she struggles to take control of her fate, Mira is drawn into the lives of two brothers with fairy tale curses of their own…brothers who share a dark secret. And she’ll find that love, just like fairy tales, can have sharp edges and hidden thorns.

“This modern fairy-tale mash-up will appeal to fans of urban fantasy and is a solid choice for any collection.” —School Library Journal

“Incorporating suspense and romance, this contemporary, edgy, Grimm-based novel is an entertaining and well-written entry in the crowded but popular genre.” —Booklist

“Cross, who knows her fairy tales, weaves a number of them into her story, giving them interesting twists as she applies them to her vulnerable and rebellious teen characters….Clever fun.” —Kirkus Reviews

Sarah Cross lives in New York and loves fairy tales in all their incarnations. Visit her online at www.sarahcross.com.