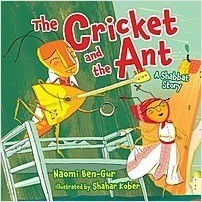 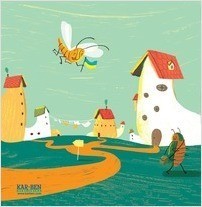 The Cricket and the Ant

The fun-loving Cricket neglects his Shabbat tasks while the industrious Ant does hers, but Cricket surprises her by coming to the rescue just in time to save her Shabbat celebration. Originally published in Hebrew.

“This book was originlly published in Hebrew under the title Can You Spare a Grain of Sugar? by a well-known Israeli children’s author and is a best seller in Israel. It is an adaptation of one of Aesop’s Fables.

A happy little cricket sings all week long until Friday morning, when he oversleeps and realizes Shabbat is coming. Then he has to bake and his cupboard is bare. He decides to solve his problem by borrowing ingredients from his neighbor, the ant. When a disaster comes to the ant, the cricket comes to her rescue. The author uses cute rhyming text to tell the story.

Children ages 3 to 8 will absorb the lessons about thinking ahead when Shabbat is coming, sharing with a neighbor and seeing that there are different kinds of neighborliness.

Source: The Horn Book Guide to Children’s and Young Adult Books Title: The Cricket and the Ant: A Shabbat Story Reviewer name: Sarah Hannah Gómez Spring 2017
In an Israeli retelling of “The Ant and the Grasshopper,” Cricket plays music all week and leaves little time to prepare for Shabbat, while Ant works so hard that she oversleeps and burns her cake. Luckily, neighbor Cricket has borrowed enough ingredients to bake a cake. The rhyming text (translated from Hebrew) is uneven, but the art adds nice cultural specificity.

“Most readers are familiar with Aesop’s fable, ‘The Ant and the Grasshopper.’ It tells the story of the
grasshopper who lazes away the summer days while the ant works industriously to save food for the
winter. However, when winter comes, the grasshopper goes hungry while the ant has plenty of food.
Israeli author, Naomi Ben-Gur, has created a Jewish rhyming version of this well-known fable. Music loving Cricket chirps and warbles, trills and dances the week away until it is late Friday afternoon. His cupboard is bare and he wants to bake a cake before Shabbat begins. What to do? He pleads with Ant, his neighbor (who has been working hard all week) to borrow sugar, oil, an egg, and finally flour with which to bake a cake. Meanwhile, Ant rests from her labors but wakes up when she smells her cake burning! Although she has wine and challah, she wonders, ‘How could she welcome Shabbat without cake?’ Not to worry. Cricket comes along with a magnificent cake that he shares with his friend and neighbor and thus ‘They sing and they dance, and their joy has no end.’

As opposed to Aesop’s rather harsh moralistic fable, Ben-Gur’s telling is much gentler. The lesson
is that friends and neighbors help each other in time of need. Although the text of The Cricket and the Ant was originally in Hebrew, for the most part the rhyme and rhythm work smoothly in English.
Kober’s sprightly illustrations enhance the text using a limited palette of reds, greens, and yellows—
and delightful black lines to add just the right touch of whimsy. Here is a light-hearted picture book
about Shabbat that will appeal to young children—secular and religious alike."—AJL

“The Cricket and the Ant is a Shabbat fable by Naomi Ben-Gur (Kar-Ben, £6).
Cricket spends his week busking, while Ant gets on with her Shabbat baking. Yet she is kind enough to lend her neighbour some ingredients when he runs out of shopping time. Sadly, she takes her eye off
her own baking and it is ruined. Will she have to face a cakeless Shabbat? Cricket is far from ready to
be talent-spotted by Lark’s mother but under-fives will still like to chant along. The moral of the story is clear and the insects’ expressions, as illustrated by Shahar Kober, are a joy.”—The Jewish Chronicle