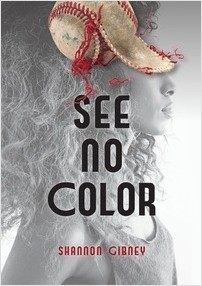 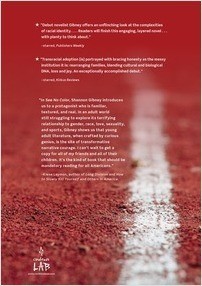 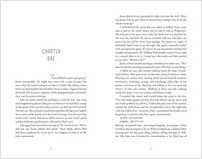 “Transracial adoption is never oversimplified, airbrushed, or sentimentalized, but instead, it’s portrayed with bracing honesty as the messy institution it is: rearranging families, blending cultural and biological DNA, loss and joy. An exceptionally accomplished debut.” — Kirkus, starred review

For as long as she can remember, sixteen-year-old Alex Kirtridge has known two things about herself: She’s a stellar baseball player. She’s adopted.

Alex has had a comfortable childhood in Madison, Wisconsin. Despite some teasing, being a biracial girl in a wealthy white family hasn’t been that big a deal. What mattered was that she was a star on the diamond, where her father, a former Major Leaguer, coached her hard and counted on her to make him proud. But now, things are changing: she meets Reggie, the first black guy who’s wanted to get to know her; she discovers the letters from her biological father that her adoptive parents have kept from her; and her changing body starts to affect her game. Suddenly, Alex begins to question who she really is. She’s always dreamed of playing pro baseball just like her father, but can she really do it? Does she truly fit in with her white family? Who were her biological parents? What does it mean to be black? If she’s going to find answers, Alex has to come to terms with her adoption, her race, and the dreams she thought would always guide her.

“There’s not much written about . . . transracial domestic adoption . . . and Gibney’s exploration may ring a bell for readers with their own familial identity challenges.”—The Bulletin of the Center for Children’s Books

“[T]he details ring true, due at least in part to the fact that Gibney is herself a transracial adoptee. As much about character and human dynamics as it is about baseball, this makes an excellent pick for fans of Mike Lupica and Catherine Gilbert Murdock.”—Booklist

“This thoughtful novel adds a much-needed perspective on a subject that affects many families but is rarely covered in YA fiction. . . . Recommended for purchase, particularly by libraries serving less diverse communities, where it will provide welcome education and support.”—School Library Journal

“Transracial adoption is never oversimplified, airbrushed, or sentimentalized, but instead, it’s portrayed with bracing honesty as the messy institution it is: rearranging families, blending cultural and biological DNA, loss and joy. An exceptionally accomplished debut.”—starred, Kirkus Reviews

“I can’t wait to get a copy for all of my friends and all of their children. It’s the kind of book that should be mandatory reading for all Americans.”―Kiese Laymon, author of Long Division and How to Slowly Kill Yourself and Others in America

“Gibney presents a smooth-flowing narrative, complicated questions, and a powerful protagonist who finds her own real answers.”―Pat Schmatz, author of Bluefish

“In See No Color, Shannon Gibney makes plain through her protagonist Alex’s story that being both black and adopted is complicated. Gibney honestly portrays hardships that black adoptees may face, such as racist comments from family members and the awkwardness of encountering other black people. As the story unfolds, Alex comes to a better understanding of being an adopted black teenager in a white world, but the journey is not easy, nor is it over by the book’s end. Drawing on Gibney’s own experiences as a transracial adoptee, See No Color is a powerful and necessary story.”―Sarah Park Dahlen, Assistant Professor of Library Science and co-editor of Diversity in Youth Literature: Opening Doors Through Reading

“See No Color by Shannon Gibney is a groundbreaking coming-of-age story….The deftly drawn trials and tender triumphs of this black biracial adoptee will resonate with all readers.”―Sun Yung Shin, poet and co-editor of Outsiders Within: Writing on Transracial Adoption

Shannon Gibney is a writer, educator, activist, and the author of See No Color (Carolrhoda Lab, 2015), and Dream Country (Dutton, 2018) young adult novels that won Minnesota Book Awards. Gibney is faculty in English at Minneapolis College, where she teaches writing. A Bush Artist and McKnight Writing Fellow, her new book, Botched, explores themes of transracial adoption through speculative memoir (Dutton, 2023). She lives in Minneapolis with her family.